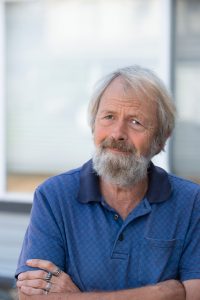 In 2013, Bill Stenson was a finalist for the 2nd Great BC Novel Contest. In 2017, Mother Tongue Publishing of Salt Spring Island B.C., announced Stenson had won its 4th Great BC Novel Contest, as judged by Audrey Thomas, for Ordinary Strangers, his novel about a daughter who wonders why there are no baby pictures of her in the family album. It is a sophisticated  novel about unsophisticated people.

It opens with a couple driving to Fernie in the early 1960s, stopping at Hope where they lose their dog — and discover instead a crying toddler in the woods. Unable to have children of their own, they proceed raise the girl they name Stacey, giving her a birthdate and remaining secretive about her lost-‘n’-found origins. Audrey Thomas describes this story about the road to forgiveness as funny, horrific and sad. “The story,” she says, “will make you think hard about what it means to be a family.”

Born in Nelson, B.C., novelist Bill Stenson attended a one room schoolhouse on Thetis Island and grew up on a small farm in Duncan. He taught English and Creative Writing at various high schools, the Victoria School of Writing and the University of Victoria, and with Terence Young he co-founded and co-edited the Claremont Review, an international literary magazine for young adult writers.

His first fiction collection of 18 stories, Translating Women (Thistledown, $18.95 2004), contained fifteen of the stories previously published in various periodicals. “Not every man would find Muriel a real looker,”; he writes in his title story. “That’s where the power of translation comes in. Muriel’s not the kind of woman you approach aesthetically straight on. It’s the way she flips her hair, the turn of her cheek, the pause she’s perfected before important sentences.”

Bill Stenson lives with his wife, poet Susan Stenson, in the Cowichan Valley and writes every day. “Bill drinks coffee, smokes his pipe and does something to do with writing every single day. Some habits are better than others.”