Stay away from windows

Forced as a small child not to draw attention to himself, Robert Krell has not sought centre stage in his adult life despite organizing countless progressive initiatives. 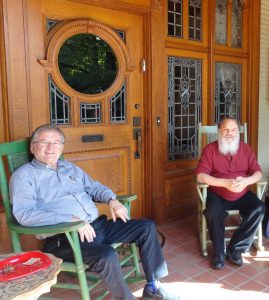 Robert Krell (left) with Yosef Wosk, says “I live because I was not murdered.”

In a new memoir Krell reveals that when his parents went into hiding in 1942 to escape the Holocaust, he was left with non-Jewish minders in Holland who protected and ultimately saved him.

Wanting to understand the nature of evil, a few of us might make an exception when it comes to those who survived inside Nazi concentration camps.

Robert Krell’s Sounds from Silence: Reflections of a Child Holocaust Survivor, Psychiatrist and Teacher (Amsterdam Publishers $21.95 U.S.) does not conform to either category.

As a child born in The Hague, Holland, on August 5, 1940, Robert Krell did not know he was a Jew. His first post-war school was a Catholic kindergarten where he was the Mother Superior’s prize pupil. He was exceedingly well-behaved and self-effacing.

That’s because, when his family was told to report for “resettlement to the East” on August 19, 1942, his parents Leo and Emmy Krell were aware that none of their friends who had obeyed previous directives had returned. Trains were leaving for either Auschwitz or Sobibor every Tuesday packed with 1,000 Dutch Jews. His obstinate father decided the family should flee rather than report as directed. 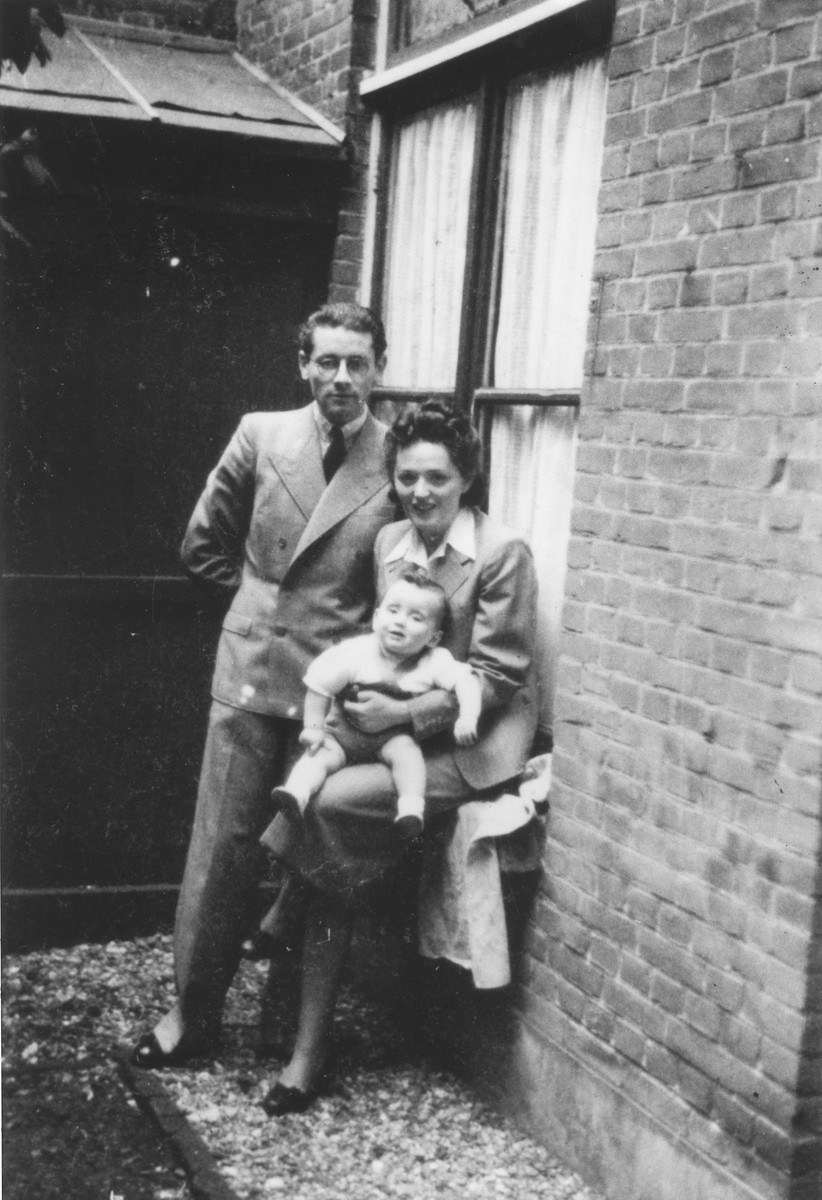 Leo and Emmy Krell at home in The Hague, 1940 with Robert.

Robert’s parents took absolutely nothing with them, not wanting to possess anything that could identify them as Jews. Robert, at age two, was hastily handed over to a Dutch neighbour, Mrs. Mulder, who agreed to give him shelter for just a few days. “My mother had packed me a little suitcase,” Krell recalls. “When she left, I apparently tried to follow her, dragging my suitcase behind me.

“When she told me this story fifty years later, she said that I looked at her in a way suggesting that I would never forgive her. Of course, I denied that, but she was right. She was much smarter than I was. Although she would save my life by having the courage to leave me with virtual strangers, I never forgave her for leaving me.”

Because older Dutch people, like Mrs. Mulder were being moved out of the city by the Germans, Robert was transferred to the care of Violette Munnik, again with the understanding that this arrangement would be temporary. Albert and Violette Munnik had no idea those few days would turn into three years.

In countries under German occupation, 93% of Jewish children were slain in hideous ways. Robert’s parents went into hiding, then split up, causing a painful schism of distrust that would ruin their marriage decades later. They nonetheless had to simultaneously view themselves as the lucky ones because over 80% of Holland’s Jews were murdered.

The Munnik’s teenage daughter, Nora, once dared to take little Robert out in a buggy, seemingly for a forbidden visit to his birth mother in hiding. “Except for that lapse,” he recalls, “she proved to be a wonderful, older sister, hiding my existence from her school friends and coming home early to teach me how to read and write.”

Excessively quiet, co-operative and obedient, Robert never complained of pain or illness. He did not cry. With his dark-brown hair “in a sea of blondes,” he was warned to stay away from the front window. The surreptitious care of his unofficial adoption family protected his soul.

“My parents survived the war,” he writes. “How lucky. And they came to take me back. How unlucky.”

Very simply, he loved the Munniks and he did not know the Krells. Leo and Emmy Krell struggled to convince their son he belonged with them. A dual family dilemma would never abate: The back cover image shows Krell alongside his adoptive mother, Violette Munnik, following a tree-planting ceremony at the Avenue of the Righteous at the Yad Vashem (Holocaust) Museum in Jerusalem in 1981. His birth mother appears on the front cover, reunited with him in 1946.

Robert Krell immigrated with his birth parents to Canada in 1951. As a UBC graduate in medicine, he later became one of the world’s leading psychiatrists in treating people traumatized as children by the Holocaust or other prisoner-of-war circumstances, while also building a friendship with Elie Wiesel and accumulating an exemplary public service record.

Krell established a Holocaust education program for high school students in 1976, an audio-visual documentation program recording survivor testimony in 1978 and assisted with the formation of child survivor groups starting in 1982. He also served on the International Advisory Council of the Hidden Child Gathering in New York in 1991 and founded the Vancouver Holocaust Education Center which opened in 1994 and teaches 20,000 students annually.

He was keynote speaker at United Nations International Day of Commemoration Ceremony in memory of the victims of the Holocaust, United Nations, New York, January 27, 2012. His 400-page memoir is deep and sane and universal. Here is a paragraph chosen at random.

“When I think of David Ben-Gurion or Golda Meir, Menachem Begin or Ytizhak Rabin, I am aware of how little of consequence Canada’s prime ministers really face. Their issues are serious where the daily lives of Canadian citizens are concerned, in matters of health and education, the status of First Nations, and the ever-present concerns about Quebec. But never, in all my years in Canada, has our government been faced with major threats to its security and the personal safety of its citizens, as has Israel. It is disconcerting how nations relatively free from immediate danger have so much to say about what Israel can or cannot do in order to defend itself.”

It would take Krell six months to recover from open heart surgery in 2009 but far more alarming were his experiences at age twenty-nine when he was aboard TWA Flight 840 from Rome to Athens, en route to Israel, when the plane was hijacked by Palestinian terrorists in 1969. Passengers feared there were explosives aboard and their plane would be crashed into Tel Aviv.

“My first reaction was rage,” he writes. “My second was of fear. The rage was instant, a primitive response to my having been hidden as a child in Nazi-occupied Holland. As far as I was concerned, the Arabs were about to finish the job that the Germans had failed to complete, my murder.”

In a chilling chapter, Krell describes how and why he was once again successful in hiding his Jewish identity, concealing his passport as well as his gold ring made in Holland featuring his initials inside a Star of David. Passengers were advised to prepare for a crash landing. Instead, they landed in the new and yet to be officially opened Damascus International Airport.

Krell’s chapter on the Jewish hero Rudi Vrba is especially important. A long-time Vancouverite before his death in 2006, Vrba escaped from Auschwitz with a cohort on April 7, 1944, and alerted the Allies to the true nature and magnitude of the Nazi death camps when he co-wrote the The Vrba/Wetzler Report. Outspoken, angry and intensely private, Vrba criticized Jewish leadership with complicity for their failures and became one of the world’s important and potent voices to counteract Holocaust denialists for the rest of his life.

Krell first arranged for the publication of Vrba’s book in both English and Hebrew via Gefen Publishing, only to have Vrba kibosh arrangements and publish via the University of Haifa instead, with the added bonus of an honorary doctorate. Krell’s subsequent friendship made him a rare confidante for Vrba who agreed to appear on the same Vancouver stage with Sir Martin Gilbert in 1999, one of countless events coordinated with Krell, as a mainstay of the Vancouver Holocaust Education Centre.

Vrba initially asked Krell to make his funeral arrangements but plans for a public appreciation went awry. As a result, one of British Columbia’s most significant authors was eventually laid to rest in an obscure cemetery, unvisited except by a precious few who know its whereabouts.

“I cherished my relationship with Rudi,” Krell writes, “rocky though it was at times.” He still hopes some fitting tribute can be organized and that someday Vrba could be reburied near the Holocaust memorial at Vancouver’s Jewish cemetery.

Krell was also privileged to become acquainted with Miep Gies, the woman who looked after the Frank family in hiding in Amsterdam, bringing them food, news and encouragement until late 1944. It was Miep Gies who found and safeguarded Anne Frank’s diary.

Robert Krell now remains yet another important B.C. author hiding in plain sight. His “window-evasive” personality has seemingly prevented him from finding a mainstream publisher for his impressive but overlong autobiography as well as his preceding work, Child Holocaust Survivors – Memories and Reflections (Victoria: Trafford 2007).

Co-authored with Czech-born, Norwegian psychiatrist and Auschwitz survivor Leo Eitinger and his research assistant Miriam Rieck, Krell previously expanded on their small bibliography of medical and psychological research pertaining to Holocaust survivors and their children and produced a work with 1,400 references dating from 1945 to 1985 for The Psychological and Medical Effects of Concentration Camps and Related Persecutions on Survivors of the Holocaust: A Research Bibliography (UBC Press 1985).

Hoping to produce an even more expansive work to be titled The Eitinger Bibliography, accompanied by two of his own original essays and a foreword by Elie Wiesel, Krell was disappointed when the follow-up compilation with Marc I. Sherman, containing 2,461 bibliographic references, was re-titled.

[In Auschwitz, where Eitinger was prisoner #105268, he had assisted with the amputating of some of Wiesel’s toes and had held Wiesel’s hands during the operation without any anaesthetic. Krell later arranged for Wiesel to receive yet another honorary doctorate from UBC in 2012. He also interviewed Wiesel on stage before a sold-out audience at the Orpheum. “He was spellbinding,” Krell recalls. “Elie has been a spiritual rock in my life.”] 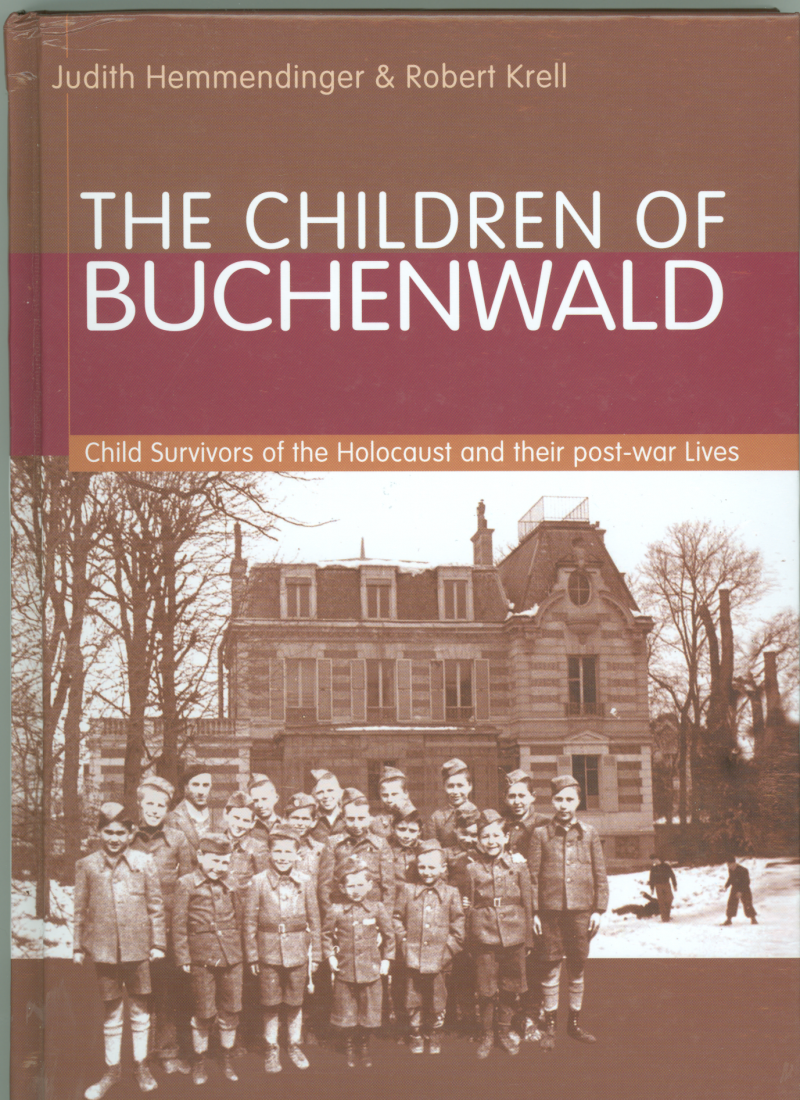 In keeping with Samuel Johnson’s invaluable advice: “Read over our work, and when you find something that is exceedingly fine, strike it out.”—Krell’s writing is always clear, rarely drawing attention to itself. One exception to Krell’s Johnsonian reserve is this excerpt from notes for a poem, in 1979, to be called simply “god.”

god has not been a friend of mine
since I have known
the truth of Auschwitz
nevertheless. I drift occasionally
toward a synagogue
sometimes to pray
sometimes to curse
but mostly to wait
for him to ask
to be forgiven

But poetry is hardly Krell’s metier. He is far more cautious. It is more appropriate to leave you with his prose.

“I know that my life was scarred irrevocably by the Shoah. I am not drawn to it like a moth to a flame. The flames are drawn to me. They pursue me. They will seek to engulf me. I ward off the flames through confrontation, through Holocaust education, through recording testimony, for ultimately there is no escape. I live because I was not murdered. Other two-year-olds were thrown alive into burning pits. One survivor acquaintance once took me aside: “Robert, I must tell, but I can’t… tell anyone. And I cannot write it down. I was a teenager. The Germans came. One went to the mother of a three-year-old, a blond girl, a little angel, and asked if he could take the child’s picture. He gave her an apple and posed her beside a tree. She was so pretty. Then he shot her in the head, picked up the apple, and ate it. I saw it.”

Sounds from Silence: Reflections of a Child Holocaust Survivor, Psychiatrist and Teacher succeeds as both a candid and careful confessional on behalf of haunted generations of Jews who have suffered from “an overdose of death.”