"The day the souls return is not a day of mourning, but a day of celebration with music, beer, graveyard picnics, food, cakes,and candy for family and the entire community.” 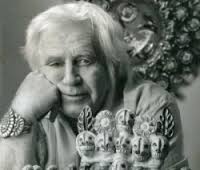 Paul St. Pierre’s family is extending an invitation to everyone to attend his memorial celebration on Sunday, November 2nd but they must first RSVP so that organizers can plan accordingly.

The family says the memorial is, “…for all who knew him, who read him, who saw his TV or stage plays, who voted for or against him, who were neighbours, who heard of him, and who just wonder what the fuss is all about.”

The event will take place between 2:00 – 4:00 pm at the Fort Langley Community Hall, 9167 Glover Road. Mexico’s Day of the Dead was one of St. Pierre’s favourite events and at his request the memorial will be in the spirit of a Day of the Dead celebration. Old movies will be screened (including St. Pierre’s award-winning Cariboo Country TV series that aired on CBC), wine will be drunk, music played, stories told, and general fun and mayhem will be the order of the day.

Paul St. Pierre always said, “if and when you wish to remember me…observe The Day of the Dead in the Mexican tradition. The day the souls return is not a day of mourning, but a day of celebration with music, beer, graveyard picnics, food, cakes,and candy for family and the entire community.”

The family are requesting no flowers and that those who wish to honour Paul’s memory, should consider his favourite charity was the BC Civil Liberties Association.