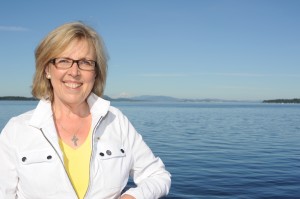 Elizabeth May, like Barack Obama and Hillary Clinton, has written an autobiography while in office.

Federal Green Party leader Elizabeth May believes Canada under the leadership of Stephen Harper has been suffering from an identity crisis and we could all use a self-help book entitled When Bad Governments Happen to Good People. Here reviewer Joan Givner responds.

Canada would still lack its first, federally-elected Green Party Member of Parliament if, at a young age, Elizabeth May had not read Rachel Carson’s Silent Spring and then discovered the mysterious deaths of her pet lambs were caused by spraying of the pesticides malathion and methoxychlor on roads alongside her family’s property.

Those two formative events—described near the outset of her new memoir, Who We Are: Reflections on My Life and Canada (Greystone $29.95)—were the genesis for her crusader’s zeal. We learn that May’s girlhood plan to become an environmental lawyer was stymied by a $400 fee required for entering university. For most of her twenties, May helped support the family by cooking and waiting tables during the summer, and collecting unemployment insurance during the winter. Family’s fortunes had plummeted after she had immigrated with her parents to Canada from Connecticut in 1973. Their Cape Breton restaurant was always a struggling enterprise.

For the sole purpose of injecting environmental issues into the 1980 federal campaign, Elizabeth May first ran as a candidate against Trudeau’s Liberal Party deputy prime minister, Alan MacEachen. Although defeat as a twenty-five-year-old waitress was inevitable—she placed fourth in a field of four candidates, receiving 272 votes—she had convinced eleven others to join the effort and, when the campaign ended, the Green Party was formed. Eventually her activism, her debating skills on display in the media, and a letter of reference from Governor Bill Clinton of Arkansas (a friend of her activist mother) helped get her into Dalhousie Law School.

May was working for the Public Interest Advocacy Centre in Ottawa when she was persuaded by Mulroney’s Minister of the Environment to become his Senior Policy Advisor. The accomplishments of this period to which she contributed include negotiating the Montreal protocol to protect the ozone layer, forging provincial agreements to cut sulphur dioxide pollution in half, establishing a national water policy, and passing the Canadian Environmental Assessment Act.

Internationally, Canada set up and helped fund the World Commission on Environment and Development. Also during this period, scientists began to raise concerns about global warming. May notes this was a good time to learn climate science—before the well-funded propaganda campaign against it went into full gear. After two years, May resigned from her position in protest of the awarding of permits for the Rafferty-Almeda dams in Saskatchewan.

Disillusioned with politics and also with legal work, Elizabeth May opted to become executive director of the Sierra Club of Canada, a position she held for seventeen years. In her second year there she became a mother, an event she declares more transformative than any change in nationality, financial position or career. She returned to work with her two-week-old baby and for the next three years they were never separated. Her daughter teethed during the World Women’s Congress for a Healthy Planet in Miami where May danced barefoot on the sand, her daughter in a baby sling, with the congresswoman from Brooklyn, Bella Abzug.

Towards the end of her stint with the Sierra Club, May was planning to become an Anglican priest, but with Stephen Harper’s electoral victory she found herself facing a choice between political involvement or watching from the sidelines as Canada’s environmental progress was reversed. God could wait; planet earth could not. By the spring 2006 she was on course to become leader of the Green party she had co-founded, but without a seat in the house.

She made history on May 2, 2011 when she defeated incumbent Conservative Member of Parliament and cabinet minister Gary Lunn to become the first elected Green Party Member of Canada in her Saanich-Gulf Island riding. Elizabeth May the night she won in her federal riding.

While some of the most readable parts of her memoir are those in which the personal and the political events are closely woven together, the final polemical chapters, with the headings, ‘How Canada Became A Petro-State’ and ‘Engaging the Profit Motive to Fight Climate Change,’ are also compelling. May quotes Thomas Homer-Dixon that, “Canada is beginning to exhibit the economic and political characteristics of a petro-state.” The key difference, she explains, between an oil-exporting democracy and a petro-state is whether the government re-invests the revenue in the country’s future, or lives off the profits. Her account of the declining respect for Canada worldwide after Harper’s withdrawal from the Kyoto Accord adds to her picture of a bleak future.

While May writes with conviction and clarity on the environment, she can be ambivalent on many feminist issues. She appreciates the women’s movement for making it possible for her to go to law school without an undergraduate degree but she is critical of feminism’s shortcomings. She acknowledges that equal pay for equal work is a valid demand; at the same time she deplores the fact that a generation of women have equated self-worth with salary and thus commodified their value.

May feels that women have taken their places in board rooms and law firms but have failed to bring about significant changes in the male-dominated culture. It is a also a little startling to hear the remark that legal secretaries remark say, “women lawyers make the worst bosses.” Such sexist generalizations (along with their racist and xenophobic permutations) usually say more about the speakers than the subjects.

Elizabeth May herself appears to never to have suffered from an identity crisis, having been on track from childhood for what she finally became—a self-designated feminist, vegetarian, activist, lawyer, aspiring theologian and now the articulate leader of the Green Party of Canada. It’s hard to conclude she would not make a good boss—and her constituents have agreed.

Having been an architect of the glory days (environmentally speaking) of Brian Mulroney’s regime, Elizabeth May acutely feels the catastrophic decline in Canada’s environmental standards and has provided a cogent paper trail to explain why.