"Knitting stories are as varied as the garments we knit. Like all good stories, they tell us things about ourselves and about what it means to be a human being." 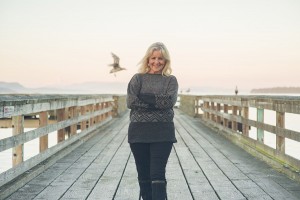 Here Sylvia Olsen recalls the origins of her latest book, Knitting Stories (Sono Nis). A few years ago, while I was writing the book that became Working with Wool, a widely read male friend asked who I thought would read a book about knitting. His question only thinly veiled his opinion that nobody who was anybody read books about knitting. My answer only slightly disguised my disdain for his question. Everyone reads books on knitting, I said. Since then, I’ve been proven right. He has been overwhelmed by how many people love knitting books. Knitting books fill whole shelves in bookstores and populate page after page on the Internet. That raises another question, though: Is there any more to be said about knitting? Do we really need another book about it?

The answer is yes, of course. Knitting stories are as varied as the garments we knit. Like all good stories, they tell us things about ourselves and about what it means to be a human being. We will never grow tired of stories like that. Handwork has occupied people for millennia. What we’ve all learned since knitting became trendy a few years ago is that it is not something new. Knitting is arguably one of the oldest activities in the sense that it is a way of creating things with our hands to keep us warm and make us look beautiful. It sits at an interesting intersection between function and fashion, and I think that we have only started to unravel its intricacies.

After Working with Wool was published, in 2005, I thought I was finished writing about Coast Salish knitters and the history of the Cowichan sweater. It had been the topic of my MA thesis and my thesis became the basis for a film The History of Coast Salish Knitters. I had also written a children’s book called Yetsa’s Sweater. Afterwards it felt like I had no more to say about knitting.

One day, during a conversation with the granddaughter of an old Coast Salish knitter I had worked with for years, I expressed my relief at finally being finished with writing about knitting. “But you’re so lucky to have spent so much time with all the old knitters,” she said. “There must be many more stories to tell.” Her comment lingered in my mind as I wrote other things, and it wasn’t long before I started jotting down stories. I spent more than fifteen years buying and selling Cowichan sweaters from my home on the Tsartlip Indian Reserve near Victoria, British Columbia. Although the business closed its doors in 1991, almost every day since I have been engaged in some way with Cowichan sweaters or with knitting. Knitted Designs by Sylvia Olsen that reference and honour the old knitters.

In 2012, I started a small business called Salish Fusion with two of my children, Adam and Joni, two of my children. We began by purchasing sweaters and vests from family members using the raw, undyed local wool that had made Cowichan sweaters so remarkable. Then, using the same wool, we started designing felted products that feature Coast Salish images and ideas. Rather than handspun, our wool is processed into Aran weight, which gives us a new range of design opportunities. Adam and Joni have become experts at manipulating a knitting machine to produce geometric designs. We cut and sew and add leather to the felted pieces and came up with beautiful new looks that reference and honour the old knitters. My kids are mixed-race people, part Coast Salish, part Scottish/English-Canadians, and it makes sense that their artistic expression should be a remix of the woolworking traditions from both sides of their ancestry. We’re constantly improving our products and processes, expanding our imaginations and having a very good time.

The new business reimmersed me in ideas about wool and knitting and what they mean to my life. It made me think again about how privileged I was to spend almost every day between 1976 and 1991 listening as Coast Salish knitters talked about life, love, dreams, disappointments and, always, hard work. As it turns out, once I started writing, I was was recording more stories than just the ones I had been told. I had many stories of my own related to woolworking practices, identity, belonging, and living and working across cultures, along with designs that expressed my ideas in a visual and material way. I realized, like so many others who have written about knitting, that knitting has been my teacher.

My life has immersed me in the Cowichan knitting tradition so thoroughly that my designs are rooted in the influence of geometric designs, knitting in the round, the absence of seams and sewing, drop shoulders with exposed knit-together joins and the natural west-coast palette of grey, mushroom, cream, and charcoal.

I’m an intuitive knitter, and I’ve spent most of my life working with my own handspun wool, creating garments for my own pleasure. Until recently, my knitting and designing have served as a kind of visual journal, a way of exploring my own creativity. Whether making garments for others, or myself they have been a personal expression—the embodiment of my inner world. Translating my designs into something other knitters could share, translating my designs into patterns that can be made with commercial yarn is a new adventure. I would not have succeeded if it weren’t for the serendipitous meeting with Barbara Robinson’s in a wool shop in Rossland, BC. I was on a book tour and was early for a reading in the public library. I went for a walk and came across the Loolu’s Lost Sheep, a wool shop on the main street. Barbara was visiting the owner and we all started to talk. One thing led to another and Barbara told me she would be interested in working with me if I ever wanted to commit my designs to paper. She has worked tirelessly with me and we are now excited to share the patterns with knitters everywhere. But even with such great help there will still glitches in the patterns. They are not deliberately put but will be almost inevitably present given that each pattern is an ongoing story of its own. Perhaps the glitches are windows to let the spirits come and go, perhaps left open to instigate your intuition or to remind us all that knitting is meant to build our characters as much as it is about teaching skills and techniques.