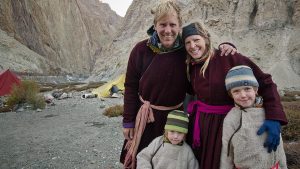 The Kirkby family traveled by by canoe, train, trans-Pacific freighter and foot to get to Zanskar.

Kirkby’s trip to the ancient Himalayan region of Zanskar and a 1000-year old Buddhist monastery, traveling with his wife and two young sons, gave him an appreciation of stillness “to quietly watch and listen.”

When you’re destined for “Little Tibet”—India’s northernmost region of Ladakh with its mountain hamlets set in thin oxygen at 12,000 ft.—you’d better be ready: travellers hear regularly of those who check in, but who don’t check out from the romanticized Shangri-la regions of the Karakoram Range. So why parents from the Kootenays with two sons, aged seven and three, would want to venture to an isolated Himalayan village in Little Tibet makes Blue Sky Kingdom: An Epic Family Journey to the Heart of the Himalaya (D&M $34.95) intriguing from the get-go.

Calling Kimberly home, Bruce Kirkby packs credentials as an outdoors photographer, writer and wilderness guide with a yen for extreme challenges. On this adventure, along with his wife Christine, he hopes to explore more deeply the realms of inner experience. Bodi, their eldest son, registers on the autism spectrum, and his mother is concerned for both her youngsters.

With a need to get out of a constricting life, and with bumps in their marriage to overcome, the Kirkbys head for Ladakh’s remote Zanskar Valley. Readers following recent news will know of ongoing border fighting between Chinese aggressor forces and the Indian army a scant 150 miles to the north. 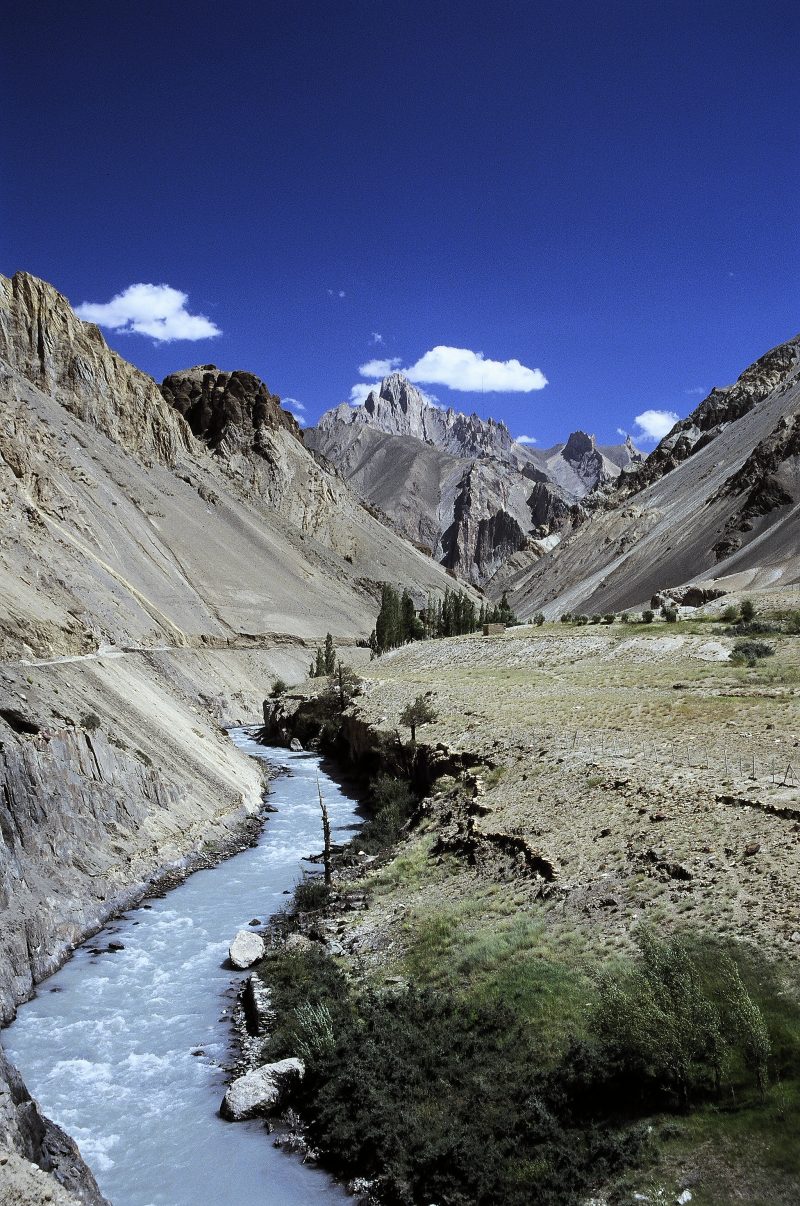 Overburdened with an L.A. film crew documenting the family odyssey, the author confesses, “selfishly, I had agreed to the television project at the last minute, viewing it as a way to advance my freelance writing and photography career.” It also pays the bills.

With a doctorate in psychology, Christine meantime is “lukewarm about the idea from the start.” With metaphysical interests in Buddhism, however, she hopes that living in a traditional Tibetan community for a time might have dividends. They can teach English and math, maybe do some good.

Kirkby regards their expedition in terms of “self-preservation,” saying “our only choice was to swim for all we were worth toward a distant, opaque light—something we hoped was the surface.”

For twelve weeks they aim for the higher heights—by canoe, train, trans-Pacific freighter to Seoul, Shanghai, then train from Beijing to Lhasa. Although it’s an epic route, Kirkby spends no more than a few pages on each of these phases. The exception is his outrage at China’s savage occupation of Tibet. A dusty, smelly Indian train ride soon kicks in, ultimately nearing them to their destination.

For ten days with a reduced film crew they trek through the magical landscapes and snowy peaks of high-altitude valleys. We learn Kirkby passed this way twenty years earlier. Things have changed: creeping modernity gnaws at Ladakh’s traditional culture. Yet some things remain: frightening canyon-precipice trails lead on to prayer flags and yaks. There are still peasants in colourful garb and necklaces calling out Jullay!, their universal greeting. 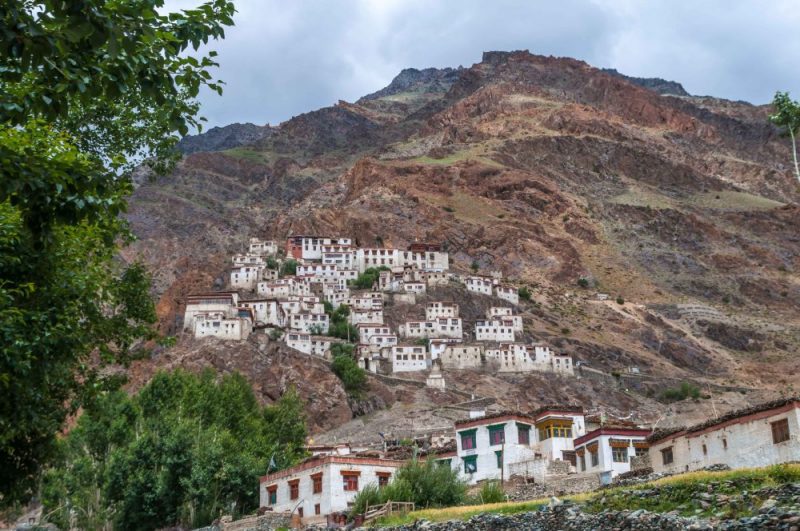 Blue Sky Kingdom takes us to Zanskar and the time-defying world of Karsha Gompa, a 1,000-year-old Vajrayana Buddhist monastery where the family has an invitation to live and teach. Once Lama Wangyal, the revered head monk, welcomes and gives them local names, and when the movie crew departs, the family is free to settle and Kirkby’s tales of daily village life become engrossing.

Kirkby’s descriptions of butter lamps, rosary beads, chanting, maroon-robed monks, simple meals and monastic puja rituals make for fascinating reading. In films like Little Buddhas, The Cup and Kundun, some of us have seen images of Tibetan Buddhism’s utterly unique culture: the Kirkbys’ new home is a world of living holiness where compassion, profound faith and everyday kindness are fundamental.

Led by their sons Bodi and Taj, who flow easily into local customs, the family deepens its awareness through classroom interactions with their novice-monk students and the villagers. Steadily, everyone loosens up. Sitting meditation helps overcome distractions; there are mysterious healings, funerals and one’s daily tsampa barley flour needs grinding. 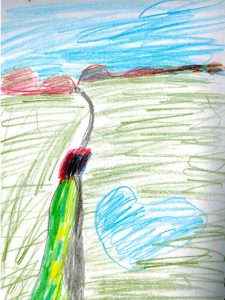 Bodi’s drawing of the family’s train ride to Lhasa in the Chinese region of Tibet.

Several times Kirkby introduces detailed accounts of the parents’ experience with their son Bodi’s autism, the stress induced by it and a deeper layman’s explanation of Asberger’s Syndrome in particular, along with its place on the autism spectrum. We get an inside look at the various developmental challenges and situations involved. The talented ink illustrations in the book are by this seven-year-old boy.

Toward the end of their three-month stay, the Kirkbys determine it’s finally the moment to discuss autism with their son. It’s a tender, vulnerable scene.

For Kirkby, he gains heightened awareness while helping Lama Wangyal’s family clan in the timeless work of harvesting barley. Everything, he intuits, is done with a prayer. In one of the book’s most affecting passages he concludes “there seemed to be no separation between life and religion in these fields. Life was the ceremony.”

Kirkby further glimpses that the ramshackle advance of modernity inevitably heralds the dissolution of this ancient society. Zanskar, he concludes empathetically, sits “perched on the edge of extinction.”

The road can be a tough teacher. Back in B.C., Kirkby has a deeper appreciation of stillness, “to quietly watch and listen.” Can we ever tire of such simple, good advice?

The most recent book by world traveller and lifelong Buddhism explorer, Trevor Carolan is Road Trips: Journeys in the Unspoiled World (Mother Tongue $21.95).