After six novels, a detective based in Nelson crosses over the line—and solves her first case outside Canada while honeymooning in Arizona. 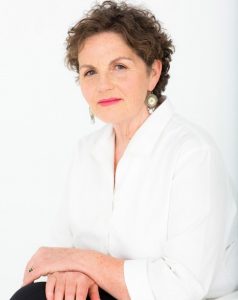 Vancouver-based Iona Whishaw based the fictional King's Cove on the hamlet she was born into, Queen's Bay, outside of Nelson. 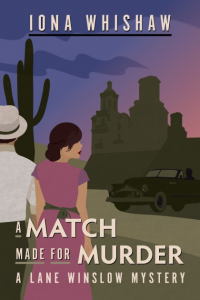 A Match Made for Murder (Touchwood $16.95) is the seventh in Iona Whishaw’s Lane Winslow mystery series set mostly in and around Nelson, B.C. during the late 1940s, immediately after the end of WW II.

Like any good mystery author, Whishaw has written her novels so you don’t have to read them in order, but doing so adds deeper levels of complexity and enjoyment. If you haven’t been keeping up, stack them all beside your favourite deck chair and self-isolate for a summer well-spent.

In a genre more crowded with quirky characters than a downtown bus, creating one with the charisma to carry a series is tougher than picking a winner in the ninth race. At a glance, Lane Winslow appears to be an attractive but innocuous young Englishwoman who comes to the Kootenays to find peace, as far as possible from five years of stress and privation in wartime London.

There, Winslow’s inherent sleuthing skills are used to complement the work of one member of the Nelson police force in particular, her ongoing love interest, Inspector Frederick Darling.

Under her cool, well-mannered, English reserve, Lane Winslow is as damaged as any veteran who spent too long at what Brits call ‘the sharp end’ of the war. She is one of many resourceful, young women who worked for the Security Intelligence Service (SIS) and the New York-based British Security Coordination (BSC).

It hits close to home as Whishaw says she based the character of Lane on her mother, who, in real-life worked for British intelligence during the war. 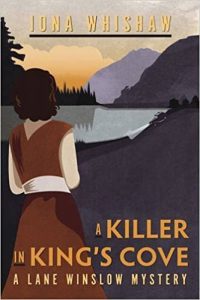 In her first novel, A Killer in King’s Cove, Iona Whishaw explores an insidious affliction of the spy: the corrosive suspicion that the agency they have loyally served is spying on them and will do so until they take their secrets to the grave, prematurely if they become ‘unreliable.’

Though Lane Winslow’s skills as an amateur detective are empowering, they also make it impossible for her to find the inner peace she seeks.

After six novels of cautious, mutually investigative foreplay with Inspector Frederick Darling of the Nelson Police, in A Match Made for Murder Winslow seems to have made a truce with her past and succumbed to the instinctive ‘nesting and breeding’ frenzy that possessed WW II survivors, resulting in the Baby Boom of the Fifties. She marries the Inspector.

Winslow and her newly-wed Fred choose to honeymoon in Tucson, Arizona, where Darling’s former boss and mentor is now Chief of Police. The newlyweds have escaped the cold of the Kootenays in November in favour of the posh and romantic Santa Cruz Inn where Winslow plans to relax and spend the holiday poolside with a good mystery. Her plans are interrupted by gunfire. One of the hotel’s wealthy guests has been shot point blank and Lane is second on the scene.

Tucson, in the late Forties, is an idyllic Southwestern town where nothing much seems to happen. Winslow proceeds to investigate the sleazy underside of the town, including its police department, and the war-spawned American culture of corporate greed.

Whishaw often uses the device of having Inspector Darling and his sidekick Sergeant Ames juggle two apparently unrelated cases that gradually prove to be connected. It’s an old trick, but a good one that allows a writer to employ a larger cast of characters and introduce information asymmetrically, avoiding the linear clue-by-clue plod of formulaic mysteries.

This time, back in Nelson, Sergeant Ames has been left in charge of the department during Darling’s absence. As he investigates a case of vandalism at the Van Eyck garage, it seems to lead directly to the death of the suspected vandal himself. Working with Constable Terrell, the new recruit, to piece together what happened in this strange and unsettling murder, Ames finds his romantic interest in mechanic Tina Van Eyck creates complications that are more than awkward; they could be deadly.

So, A Match Made for Murder is not just a double murder investigation; it’s a double romance. But what really makes the Lane Winslow mysteries so compelling is that Whishaw gets the tone and mood of the time and place exactly right. Her eclectic mix of remittance men, Imperial refugees and small-town Canadians—all suffering from wounds or moral crises as a result of the recent war—should provide her with plots and characters for many novels still to come.