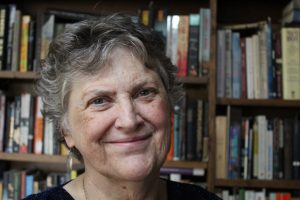 In her third book, Food Floor: My Woodward’s Days (Madrona Books $15.95) Margaret Cadwaladr recounts working as a grocery cashier at Woodward’s Food Floor in Vancouver in the 1960s. The department store had been a Vancouver landmark for over a hundred years when it closed in 1993. Woodward’s also had stores in other parts of B.C. and Alberta before its operations were sold to the Hudson’s Bay Company and its name was confined to retail history.

“During the completion of the book, COVID-19 enveloped the world and shone a light on the important role of the grocery store clerks and cashiers,” says Cadwaladr. “The book is dedicated to their courage and hard work.”

Available in bookstores and at www.foodfloordays.com on July 20, Food Floor is illustrated with black & white and colour photographs, both historical and contemporary.

Cadwaladr’s first book, In Veronica’s Garden: A Social History of the Milner Gardens and Woodland (Madrona Books 2002) is about the important public garden on Vancouver Island near Qualicum Beach.

With support from the Darts Hill Garden Conservancy Trust Society and the City of Surrey Cultural Grants Program, Cadwaladr wrote and published her second tribute to a major public garden, A Secret Garden: The Story of Darts Hill Garden Park (Darts Hill Garden Conservancy Trust Society 2019) in which she recounts the history of Ed and Francisca Darts’ donation of their South Surrey garden–which began as a fruit and nut orchard–to the City of Surrey in 1994 for horticultural education for the next 999 years. 978-1-9995465-1-9