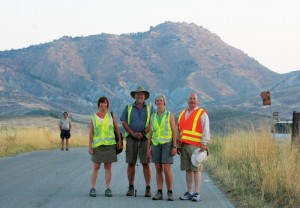 The full title  for Zuehlke’s 19th volume on Canada’s military is Through Blood and Sweat: A Remembrance Trek Across Sicily’s World War II Battlegrounds (D&M $36.95)

Leading up to Remembrance Day, Zuehlke will be travelling across the country with filmmaker Max Fraser for their Operation Husky Remembrance Film and Book Tour. Fraser accompanied Zuehlke on the 2013 Sicilian trek in order to make his documentary, Bond of Strangers. The film and the book on Operation Husky—the 1943 invasion of Sicily—are derived from the 70th anniversary pilgrimage that took place in July 2013.

Mark Zuehlke, winner of the 2014 Pierre Berton Award, and the Whitehorse-based filmmaker Fraser, will join forces a joint discussion, reading and documentary presentation at the Goldcorp Centre for the Arts (149 West Hastings Street, Djavad Mowafaghian Cinema, Vancouver) on Sunday, November 1 at 2:00pm, hosted by the Seaforth Highlanders of Canada. Tickets are $20 and can be purchased from Eventbrite. For Through Blood and Sweat and the documentary, it was necessary for a small contingent of marchers to trek between 15 and 35 kilometres each day, usually along winding country roads, in order to reach the outskirts of a small town or village. Often they walked under a searing sun, with Mount Etna’s soaring heights always in the distance. The memorial marchers were joined by a pipe band as they were repeatedly greeted by hundreds of cheering and applauding Sicilians. Before each community’s war memorial, a service of remembrance for both the Canadian and Sicilian war dead was conducted. Each day brought the marchers closer to their final destination—Agira Canadian War Cemetery, where 490 of the 562 Canadian soldiers who fell during the course of Operation Husky in 1943 are buried.

After twenty gruelling days, the marchers were joined at Agira by nearly 1,000 Canadians and Italians for a final, emotional ceremony of remembrance.

Mark Zuehlke would agree with Leonardo da Vinci who said, “Work is the law.” A Pierre Berton without the bow tie, Zuehlke has quickly become one of Canada’s pre-eminent war historians with a spate of activity rivalled only by the pace of the late George Woodcock. In an age when creative non-fiction is chic, he does old-fashioned research.

To produce 27 titles between 1992 and 2014, Zuehlke has not busied himself with chapbooks, poetry titles or personal ramblings. He has somehow researched and written fourteen, thick military histories in that period, simultaneously producing a trilogy of detective novels, plus nine other books, including the first and only book to examine the phenomenon of remittance men in B.C., Scoundrels, Dreamers and Second Sons: British Remittance Men in the Canadian West (1994).

In the eighth volume of his Canadian Battle Series, On to Victory (2010), Zuehlke recalls the fiercely fought and bittersweet liberation of Holland, incorporating the views and words of men on the ground. Never mind hockey¬—this was the greatest Canadian victory. It cost more than four billion dollars and the lives of 1,482 Canadians, as well as 6,298 casualties, but the Dutch remain grateful. Born in Vernon in 1955, Mark Zuehlke has received the City of Victoria Butler Book Prize for Holding Juno (2005) and the Canadian Authors Association Lela Common Award for Canadian History for For Honour’s Sake: The War of 1812 and the Brokering of an Uneasy Peace (2006). In his spare time he won the Arthur Ellis Best First Novel Award from the Crime Writers of Canada for Hands Like Clouds (2000).