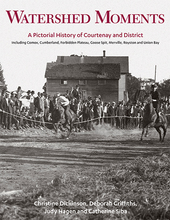 Here are the shortlisted nominees for the 2015 Lieutenant Governor’s Medal for Historical Writing are: 1997 – Richard Somerset Mackie, Trading Beyond the Mountains: the British Fur Trade on the Pacific 1793–1843. Read about Richard Mackie. 1994 – Tom Henry, The Good Company: an Affectionate History of the Union Steamships. Read about Tom Henry.

The society publishes an excellent quarterly journal, British Columbia Historical News, and provides a forum to publicize successes of regional historical societies. The members of the society hold an annual three-day conference, usually in May, at different locations in the province. Honours are presented at the conference to members who have made outstanding contributions to history and the Lieutenant Governor’s Medal is awarded, along with recognition for runners-up and honourary mentions. The BCHF and David Mattison also jointly sponsor a yearly award to a Web site that best contributes to the understanding and appreciation of British Columbia’s past.