From father to son

Ted Grant is appointed to the Order of Canada at 86. 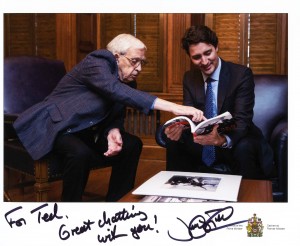 Victoria photographer Ted Grant shows Justin Trudeau one of the most famous images of his father.

In the process he bridged the gap between two Trudeaus.

While he was in Ottawa for the ceremony, veteran photographer Ted Grant of Victoria was able to meet briefly with new Prime Minister Justin Trudeau and provide him with a copy of his B.C.-published book, Ted Grant: Sixty Years of Legendary Photojournalism (Heritage House 2013). Written by Thelma Fayle, the pictorial volume features an iconic cover photo of Pierre Elliott Trudeau spontaneously sliding down a bannister at a 1968 Liberal convention in Ottawa. “I got lucky,” Grant told CBC’s On the Coast guest host Laura Lynch, describing the image. “I react, I go, ‘Oh my God, look at that,’ and the camera goes click.” Filmmaker Atom Egoyan and B.C. author Wade Davis were also appointed to the Order of Canada in December. Author, explorer, ethnobotanist and photographer, Wade Davis is recognized for his work to promote conservation of the natural world. A Harvard-educated anthropologist and explorer-in-residence at the National Geographic Society, Davis has written 15 books including The Serpent and the Rainbow. In 2016, Davis was professor of anthropology and the B.C. Leadership Chair in Cultures and Ecosystems at Risk at the University of B.C. It was back 1949 when Irene Grant, a newlywed bride, splurged big-time and bought her husband Ted his first camera. That $30 investment paid off for more than sixty years, making the cock-eyed cameraman Ted Grant into one of Canada’s most successful freelance photographers.

Grant is among only two percent of the population who peer into a viewfinder with their left eye because he was born with a condition formerly known as a ‘lazy eye.’ Despite his handicapped vision, Grant persevered as a congenial generalist, working his way through the National Film Board to take classic photos of Pierre Elliott Trudeau (sliding down a banister), sprinter Ben Johnson (crossing the finish line in Seoul, raising his right arm alongside his rival Carl Lewis) and the children of Chernobyl.

With more than 300,000 images stored at Library and Archives Canada and the National Gallery, Ted Grant has been the subject of a 2007 documentary, Ted Grant: The Art of Observation and received an honorary doctorate from UVic in 2008.

Although the retrospective has its share of politicians and celebrities—such as Jackie Kennedy, David Ben-Gurion, Margaret Thatcher, John Travolta, Patrice Lumumba, John Diefenbaker and Joe Clark (a friend who contributed the foreword)—Grant has said he preferred to take pictures of so-called ordinary Canadians.

The only thing lazy about Ted Grant was his right eye.

One Response to “From father to son”