She’d rather be in Italy 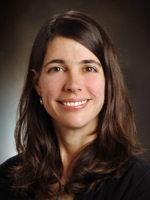 As an associate professor in History and Humanities at SFU, Emily O’Brien has examined the autobiography of the fifteenth-century humanist Aeneas Sylvius Piccolomini, better known as Pope Pius II, who wrote a romantic novella and his life story, Commentaries. Her new book,  The Commentaries of Pope Pius II (1458-1464) and the Crisis of the Fifteenth Century Papacy (UTP $65), shows how Pius’ self-portrait affected and supported the evolution of the Renaissance papacy. “Though Canadian born,” she writes, “I consider Italy to be my true intellectual home.”

O’Brien came to SFU in the fall of 2005. She grew up in Toronto, did her B.A. at the University of Toronto and then went to Brown University in Rhode Island for graduate work. Her research interests took her to Rome and Florence, where she spent almost three years. Her central field of research is the Italian Renaissance. While finishing her thesis, she taught for several years in Harvard’s Expository Writing Program. She received her Ph.D. in History in the spring of 2005.

The Two Lovers: The Goodly History of Lady Lucrece and Her Lover Eurialus. Ottawa: Dovehouse Editions, 1999. Edited with Kenneth Bartlett.