Sanford Blade up for two awards 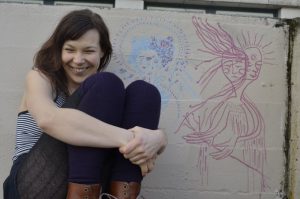 Susan Sanford Blades of Victoria has won the ReLit Award for Fiction for her novel, Fake It So Real (Nightwood Editions $21.95).

Fake It So Real is a raw and honest novel that dredges up the pain and ecstasy of lives lived authentically. In 1983, Gwen meets Damian, the lead singer of the (fictional) punk band, Dorothy’s Rainbow — a band that Tom Holliston of Nomeansno says is “arguably the best punk band to ever come out of Victoria, British Columbia.” Gwen is feral and insults Damian’s band; Damian is beautiful and pours himself over his mic like Johnny Rotten. They fall in love — or something. After seven years and two accidental pregnancies, Damian abandons Gwen. Told from the perspectives of Gwen and her two daughters, Sara and Meg, this novel spans almost four decades — from Nancy Spungen to Courtney Love to Grimes.

Fake It So Real has also been shortlisted for the top B.C. prize in fiction, the Ethel Wilson Fiction Prize, which is part of the BC & Yukon Book Prizes. Winners will be announced on September 18.

Susan Sanford Blades completed an MFA in Creative Writing from the University of Victoria. She has been published in the anthologies The Journey Prize Stories 32: The Best of Canada’s New Writers and Coming Attractions 16, and in literary magazines across Canada as well as in the US and Ireland, including Minola Review, Event, the moth, The Puritan, Numero Cinq, The New Quarterly, Grain and Prairie Fire. She was long-listed for the 2020 Journey Prize, a prestigious award honouring Canada’s best short fiction, for her story, “The Rest of Him,” which has become part of Fake It So Real.

The ReLit Awards have been described as the “country’s pre-eminent literary prize recognizing independent presses.” (Globe and Mail). They are awarded annually to book-length works in the novel, short-story and poetry categories. They were founded in 2000 by Newfoundland filmmaker and author Kenneth J. Harvey and are now run by Katherine Alexandra Harvey. ReLit is short for Regarding Literature, Reinventing Literature, and Relighting Literature. The awards were conceived by Harvey as an alternative to larger mainstream prizes such as the Giller Prize and the Governor General’s Awards.