Joan Skogan could be impossible--and she could be the kindest, most generous friend. She was a wanderer and a wonderer. She was at home in bars with bikers and loggers and fishermen. But she was also at home at the symphony and the opera. 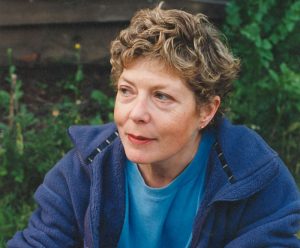 Joan Skogan was a one of a kind author deeply connected to the west coast. The sea, as she well knew, was often a tumultuous place, and she was no stranger to tumult. In March of 1989, when the Exxon Valdez ran aground, resulting in an unprecedented oil spill, Joan Skogan had been on a ship in the area and heard the radio call to the coast guard. Thereafter she could and would recite the distress message she heard word-for-word. During the environmental disaster, she had helped with the clean-up of marine life and was greatly disturbed by the catastrophe. As a coastal writer she would consistently write about the ocean [see bibliography below] and she could be fierce in her opinions, particularly regarding the environment. Rogue waves did not exist. Whale watching did not bear discussion. During her final years, Joan Skogan did things in 20-minute increments… she would sew… she would stain the walls of her house in various shades of yellow… she would make curtains out of things like yellow wool blankets. Art was everywhere. She frequented thrift stores, giving bags and bags of gifts to her friends. Books. Books. And more books. As well as scarves, jackets, cowboy boots. The constants in her house were her sculptures and First Nations baskets. She ordered and re-organized her belonging rigorously, but in 20-minute sessions. Everything was neat like the inside of a boat.

On her Gabriola Island property, after the tragic loss of her son, she had remained creative with her strange and wonderful garden. She planted trees everywhere–alders, cedars, firs and a gigantic sequoia — planting on the road allowance. She stained her garden gate a luscious shade of turquoise and enjoyed sending postcards with odd messages. One provided instructions for fixing a recalcitrant sewing machine. After leaving Gabriola, before she moved to Nanaimo, Joan Skogan briefly lived in Vancouver. Few people had impartial relations with her, and she had her share of lovers. She was not someone who stayed on the sidelines.