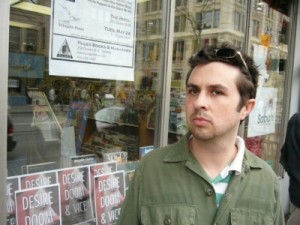 Nathaniel G. Moore has won the 2014 ReLit Awards for fiction with his novel Savage: 1986-2011 (Anvil Press $20). ReLit Awards are for books from smaller, alternate or independent Canadian publishers. There is no cash award.

According to publicity materials for the winning novel: “Nate, a creative, messy, and anxious teen, has chosen Randy Savage as his hero. As he finishes high school, the world to which Savage belongs is quickly waning in popularity, and Nate begins to see the wrestler’s downfall mirrored in his own life. But not until the family dismantles for good in 1994 does Nate’s life truly begin to fracture.

“Savage 1986-2011 chronicles the middle-class implosion of Nate’s nuclear family, bracketed by July 1986 — when he first saw Randy Savage in person — and the wrestler’s sudden death in May 2011. When Savage dies, Nate is freed from beliefs — once a source of beauty and escape — that had come to constrict him, fusing him to a moribund past.

“The novel is about the blurred lines between child and adult roles and the ever-changing landscape of interior heroism. Whether dealing with a family’s economic turbulence, the scarring effects of teenage love, or creating a new family order, Moore revisits, remasters, and repackages a twenty-five year family odyssey with guts, honesty, and love.”

Having only recently removed himself from Toronto in favour of Vancouver by the time he published his fifth book, Savage: 1986-2011, which owes its sardonic title to ongoing reference to the WWF wrestler Randy Savage, Nathaniel G. Moore has been a frequent contributor to Open Book: Toronto, the Globe & Mail and This magazine. His book Wrong Bar was nominated for the 2010 ReLit Award for best novel and his fiction had previously appeared in subTerrain, Joyland, Taddle Creek, and Verbicide magazine. He also wrote for Bravo! Television in the short film Sahara Sahara. 978-1-927380-55-0