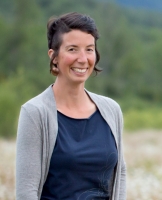 Fabienne Calvert Filteau, born in Ontario in 1984, grew up in Ontario and graduated from the University of Victoria in 2011, having also lived in China, Ghana and Seattle. For a decade she worked as a tree planter throughout B.C. Currently she lives on Gitxsan territory in Hazelton, B.C. Her first poetry collection, Second Growth (Creekstone 2014) has inspired praise from poets such as Bernice Lever and Gillian Wigmore.

Bernice Lever describes the poems in Second Growth as both challenging and eloquent, citing, in particular, “Becoming Lovers”, “Tonguing”, “Grizzly on the Logging Road” and “Saskatoons”. Filtreau’s “Becoming Lovers” describes a mystical being circling her beach tent seven times. Her “Saskatoon” reaches readers with ironic humour. The long poem “Tonguing” refers to the very spacing of one’s tongue (words and speech) and searches of both inner and outer body, then the universe and back to earth. Using some lines from Earle Birney’s “Bear on the Delhi Road” she leads readers to ‘where wild is one last freckle on the continent’s white washed brow.’

Referring to Filteau’s various poems that are derived from her annual BC interior tree planting jobs, Lever delights in her language in “Beetle Kill” – ‘the red forest, a dead sea.’ “I also felt tears,” says Lever, “when I drove the ‘connector’ from Merritt to Kelowna, B.C., reaching that mile-high view of endless hectares of beetle-killed trees.”

Fabienne Calvert Filteau wrote as a child and had a short story story included in a “Get Writing” anthology for youth at age 13, edited by Jeffrey Canton and Sheree Fitch. Two years later, she won the League of Canadian Poets’ Youth competition at age 15. She won a Paragon Poetry Contest in 2009.