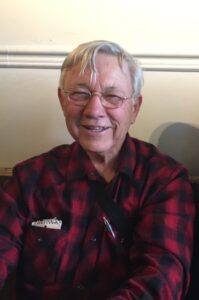 Born in Edmonton, Alberta on March 26, 1942, Robert Hogg was raised on the VT Ranch on Green Lake in the Cariboo, and in the lower Fraser Valley.

Hogg studied English and Creative Writing at the University of British Columbia where he co-edited the Canadian literary magazine TISH until 1964. While at UBC, Hogg met Charles Olson, the post-modern, avant-garde poet who became a friend and mentor. Hogg completed his graduate studies at SUNY Buffalo under Robert Creeley, another friend of Charles Olson. Hogg then moved to Ottawa and taught American and Canadian poetry at Carleton University for the following thirty-eight years, becoming a professor of English Literature and Poetics.He published five books of poetry and six chapbooks, as well as editing a comprehensive anthology of Canadian poetic theory. His poems appeared in more than 70 periodicals.

In 2005, Hogg retired to his farm located near Ottawa in the hamlet of Mountain (which he had bought in 1973). He died at the Ottawa General Hospital on Sunday November 13, 2022 after a long battle with cancer.