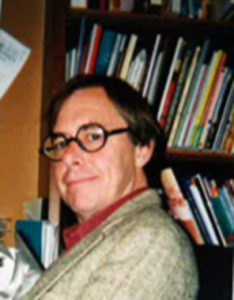 Born in Kelowna in 1948, one of B.C.’s well-known booksellers, David Kerfoot, died of cancer on January 11 at Vancouver General Hospital.

When Kerfoot was selected as Canadian Bookseller of the Year from the Book Publishers Professional Association in 1986, he was the first bookseller ever chosen who did not own a bookstore. He is mainly remembered as the knowledgeable and opinionated manager of the Paperback Cellar downstairs at the Duthie Books main location on Robson street. He also worked at the last Duthie Books outlet on 4th Avenue in Kitsilano until it closed in 2010.

He was on the founding board of Pacific BookWorld News Society. A stickler for accuracy, on his final day, he requested that no one say he had passed away. Instead, he died.

He suggested to his sister that his epitaph could be, “He loved language and books, and he was not without friends.”