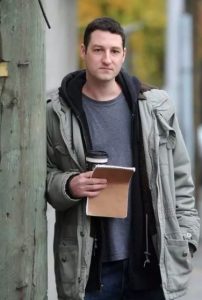 Journalist Travis Lupick will receive the George Ryga Award for Social Awareness on June 28 in Vancouver.

Travis Lupick is an award-winning journalist and author based in Vancouver’s Downtown Eastside. His writing on drug addiction, harm reduction and mental health has brought much needed attention to the serious issues facing many cities across Canada.

Lupick is the author of Fighting for Space: How a Group of Drug Users Transformed One City’s Struggle with Addiction, which documents and offers insight into the opioid crisis facing Vancouver’s Downtown Eastside. His reporting on Canada’s overdose epidemic has also earned Lupick the Canadian Association of Journalists’ Don McGillivray award for best overall investigative report of 2016 and two 2017 Jack Webster awards for excellence in B.C. journalism.

“I hope that receiving the George Ryga Award will encourage more discussions about Canada’s overdose epidemic,” says Lupick, who adds that he worries that public attention on this topic is beginning to wane despite the number of overdose deaths being higher than ever. “It is my hope that this award will help spread awareness and persuade other cities to learn from Vancouver’s successes and mistakes to help make much needed changes to how we approach addiction and harm reduction across our country.”

Lupick, who lives in Vancouver, continues to be an outspoken and passionate speaker on the topics of drug addiction and harm reduction. A respected journalist who has worked in Sierra Leone, Liberia, Malawi, Nepal, Bhutan, Peru and Honduras, he works as a staff reporter for the Georgia Straight and has written for the Toronto Star and Al Jazeera English, among other outlets.

The public is invited to a free ceremony and presentation on June 28 at 7 p.m. at VPL’s central branch downtown.

About the George Ryga Award for Social Awareness