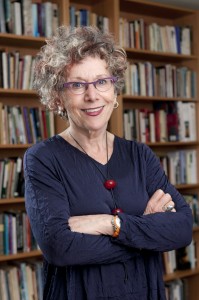 An officer of the Order of Canada, Lorna Crozier has been acknowledged for her contributions to Canadian literature, teaching and mentoring, with five honourary doctorates, most recently from McGill and Simon Fraser Universities.

Her books have received numerous national awards, including three Pat Lowther Awards and the Governor-General’s Literary Award for Poetry. She was also honoured with the Lieutenant Governor’s Award for Literary Excellence. The Globe and Mail declared The Book of Marvels: A Compendium of Everyday Things one of its top 100 books of the year in 2012, and Amazon chose her memoir as one of the 100 books you should read in your lifetime.

A professor emerita at the University of Victoria, she has performed for Queen Elizabeth II and has read her poetry, which has been translated into several languages, on every continent except Antarctica.

“I never met George Woodcock, but I am a great admirer of his writing and his social engagement,” says Crozier, who like Woodcock was born on the prairies, but later moved to the West Coast. “To receive this award named after him is a great honour. I am thrilled that my name will appear on a plaque in front of this center of learning and creativity.”

“The Argentinean author Jorge Luis Borges said that ‘paradise is a library,'” she adds. “I feel I’ve been granted a small corner of paradise in Vancouver.”

Her latest book, What the Soul Doesn’t Want, was nominated for the 2017 Governor General’s Award for Poetry. She lives on Vancouver Island with writer Patrick Lane.

The public is invited to a free ceremony and presentation on June 28 at 7 p.m. at VPL’s central branch downtown.