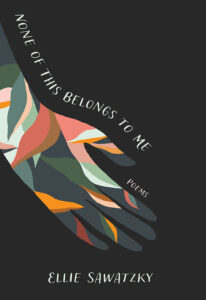 Ellie Sawatzky joins nine other poets (see below) in this year’s Poetry in Transit program. A poem submitted from Sawatzky’s debut collection None of This Belongs to Me (Nightwood Editions $18.95) will be printed on a poster and displayed in various buses in TransLink’s fleet.

Sawatzky’s examination of identity and the nature of ownership and belonging is inspired (some say haunted) by old boyfriends, girls named Emily, ancestral ghosts, polar bears and mythic horses. From rural Ontario to Kitsilano to Burning Man, Sawatzky investigates childhood learning, girlhood learning, and what is inherited versus what is acquired. She calls into question the ways in which people both nurture and harm one another and the environment.

The poets in this year’s Poetry in Transit (in alphabetical order) and their featured books are:

Joseph Dandurand, Fort Langley The East Side of It All (Nightwood Editions)

Leanne Dunic, Vancouver One and Half of You (Talonbooks)

Shaun Robinson, Vancouver If You Discover a Fire (Brick Books)

Ellie Sawatzky, Vancouver None of This Belongs to Me (Nightwood Editions)

Poetry in Transit, now in its 26th year, displays the verses of selected BC poets inside the buses in TransLink’s fleet for the reading pleasure of the commuting public. To be eligible for the program, submitted poems must be written by writers who reside in BC, and published in book form by a Canadian publisher.

Poems are submitted by publishers and selected by a jury. The jury this year consisted of poets Evelyn Lau and Rob Taylor. A new innovation for 2022/23 posters is that the poetry selections have been paired with the work of local photographers who participated in an Instagram photo competition led by TransLink.

The program’s sponsors are the Association of Book Publishers and TransLink.