[Available at the Hope Visitor Centre and at Barry’s Trading Post in Yale.] 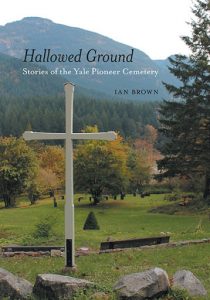 If time machines ever become a reality, I’ll be first in line to travel to the past. Like many social historians, I want to know — what was it like to live then? Choose your own “then.” For me, it’s the early history of B.C. I do historical walking tours in Victoria’s Ross Bay Cemetery, and one focus has been gold rushes, especially the Fraser River and Cariboo rushes.

Ian Brown’s Hallowed Ground: Stories of the Yale Pioneer Cemetery offers glimpses of that time and more recent periods through vignettes about the people interred in this small burial ground sandwiched between the Trans-Canada Highway and the CPR’s mainline in Yale.

Local cemeteries are rich with inspiration for delving into the lives and social histories of those who built our communities — or just passed through them. “Cemeteries silently record the past,” notes The Canadian Encyclopedia. “They document local history and biography [and suggest] settlement patterns and the history of surrounding communities.”[1]

Yale began as Fort Yale, established by the Hudson’s Bay Company in 1848 and named after Chief Trader James Murray Yale of Fort Langley.[2] When thousands of miners arrived in the Fraser River gold rush in 1858 and the Cariboo gold rush after 1862, Yale – at the head of navigation on the Fraser — became a lively, thriving place.

The petering out of the gold rushes led to a decline that turned around dramatically with the construction of the Canadian Pacific Railway in the 1880s. With its completion, Yale again declined, only to revive on a smaller scale with the construction of the Canadian Northern Railway between 1912 and 1914. Today, it’s a tiny place with an outsized history. 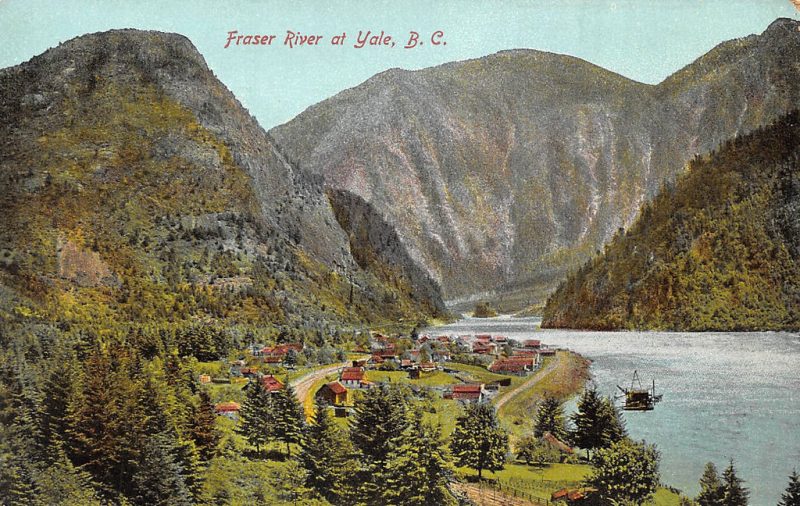 Brown begins with the story of the cemetery itself. As soon as people settle somewhere, they have to deal with the dead, so a cemetery is often one of the first “amenities” in a community. Discussions about location, design, and cost may be recorded in the local newspaper or other sources, such as local government or church records. It’s interesting that the establishment of the Yale cemetery was not well documented, but Brown discovered a delightful description in Bishop Hills’ diary of the selection of a site for the Yale cemetery, dated June 13, 1860: “I walked today with Mr. Crickmer [Anglican priest] in search of a burial ground. We selected a spot westward near two streams. Our ramble was pleasant amidst beautiful scenery and flowers in wondrous profusion. We gathered strawberries” (p. 4).

This is a good example of Brown’s effective use of quotations throughout the book – from diaries, newspapers (especially the Inland Sentinel), and personal reminiscences.

What made researching those buried in this cemetery especially challenging was the epic flooding that destroyed parts of it several times. That damage, compounded by years of neglect, means that the precise locations of many graves is unknown and relatively few markers remain. The transient nature of the population, caused by the gold rushes and railway construction, meant that most people buried there were non-residents, which also helps explain the neglect over the years. 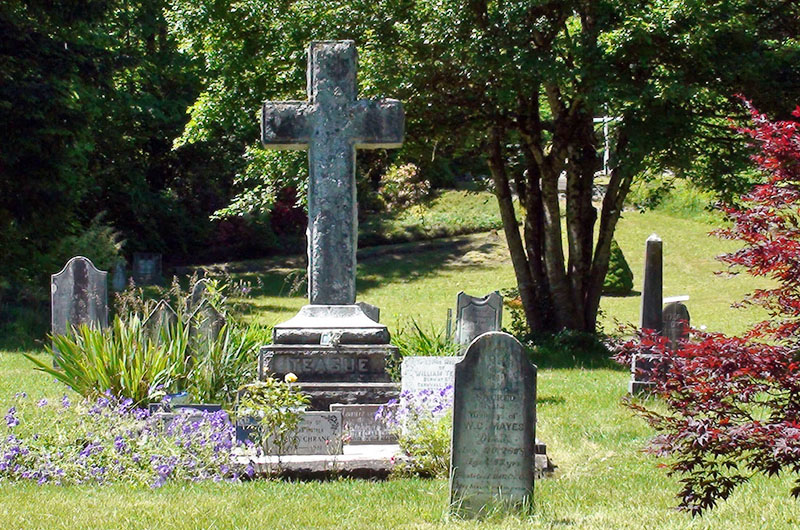 Thankfully, a generous bequest in 1994 from former Yale-area resident Dr. Keizo Hayashi to the Yale and District Historical Society resulted, Brown writes, in “an endowment to fund the upkeep of the Yale Pioneer Cemetery. Today, the endowment ensures that the grass is cut, the headstones are repaired and kept upright, and that the invading bushes on either side are held at bay” (p. 10).

An interesting aspect of the Yale Pioneer Cemetery is its role as a community cemetery. Associated with the Anglican Church, many of the funerals have been conducted by Anglican clergy, but Catholics and other non-Anglicans are also buried there, including Louis Oppenheim (1810-1890), a Prussian-born Jewish merchant of Yale.[3] 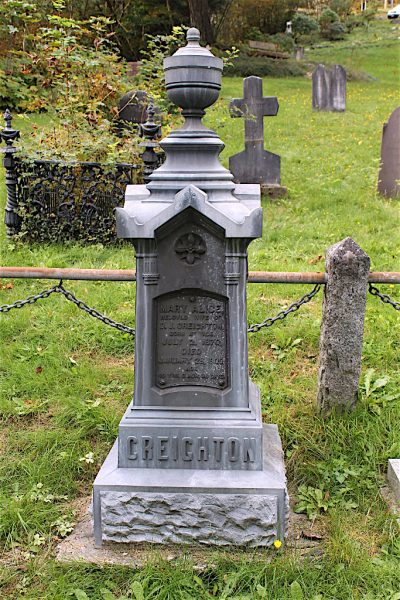 Only Anglican burials seem to be recorded officially in church records. For many of the non-Anglicans, Brown has had to rely on sources such as newspaper death notices, obituaries, and death certificates. He is sometimes unsure if someone was actually buried here. For example, a Chinese child reported as having died in or near Yale may have been buried in the Chinese cemetery, established some distance from town. Another child, Abbe Nelson, is noted as possibly being in the Yale cemetery (in fact, she is in Ross Bay Cemetery in Victoria).

Many children were, of course, buried in Yale. I especially appreciate the care Brown has taken with children’s deaths. By giving them a separate section in the book, he brings out how great the loss each one was to the family and the community.

People sometimes underestimate this sense of loss to those in the past, assuming that, because so many children died at early ages, it was somehow acceptable to families and that they just treated it as nothing special. This is clearly not true. People loved their children then just as much as we do today, as evidenced by the touching obituaries and moving epitaphs.

Brown writes well. He skillfully weaves details of Yale’s history into the stories of the individuals buried in this lovely place. Ads for businesses and photos of a small number of people buried at Yale help us visualize a community much different from the one we see today. I would have liked to see photos of some of the more elaborate grave markers and some of the old wooden ones with interesting epitaphs. The book is divided into four main sections: “Brief History of the Yale Pioneer Cemetery,” “Early Burials,” “Post 1960 Burials,” and the “Royal Canadian Air Force Plane Crash.” Within the Early Burials is the subsection on children (not noted in the table of contents). 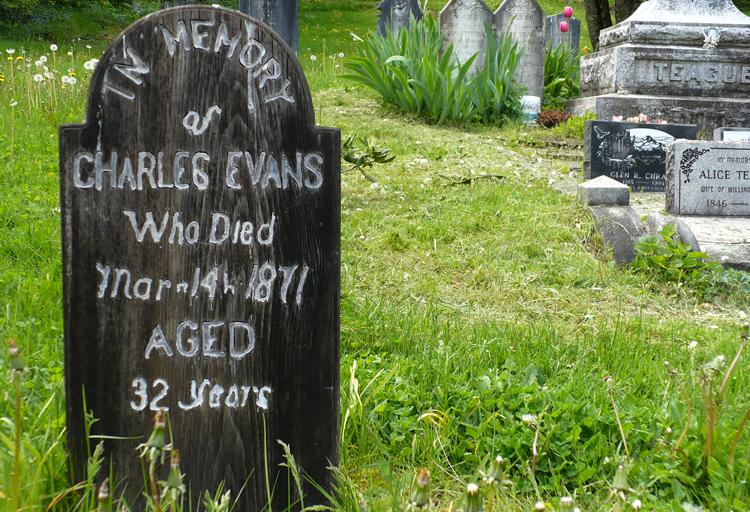 The inclusion of the section on the crash of an RCAF bomber in September 1941 seems like an odd choice. En route from Kimberley to Vancouver, it crashed in the mountains above Yale. Brown uses lengthy quotations from various newspapers to describe the ensuing search, the attempts to bring out the bodies, and the decision to bury the airmen where they lay because of difficulties with weather, terrain, and bears. While it’s interesting, it’s unrelated to the Yale Pioneer Cemetery. If page count was an issue, the “RCAF pages” might have been used better for an index.

Which brings me to a few disappointments with this useful book that adds so measurably to our knowledge of the Fraser Canyon. Researchers and other reference-minded readers will be seriously handicapped by the lack of an index. Even a simple list of the names, with the page where their main write-up occurs, would have made a huge difference. I hope that a new edition of Hallowed Ground will address this.

Related to this is the frustrating cross-referencing. Within each chapter or section, people appear in order by year of death, beginning in 1858, and cross-referencing is limited to “(see above)” in a related entry. So for example, if a wife dies in 1861 and her husband dies in 1888, the reference to his wife appears only as “(see above)” – but that would mean leafing through many pages to find “above”! 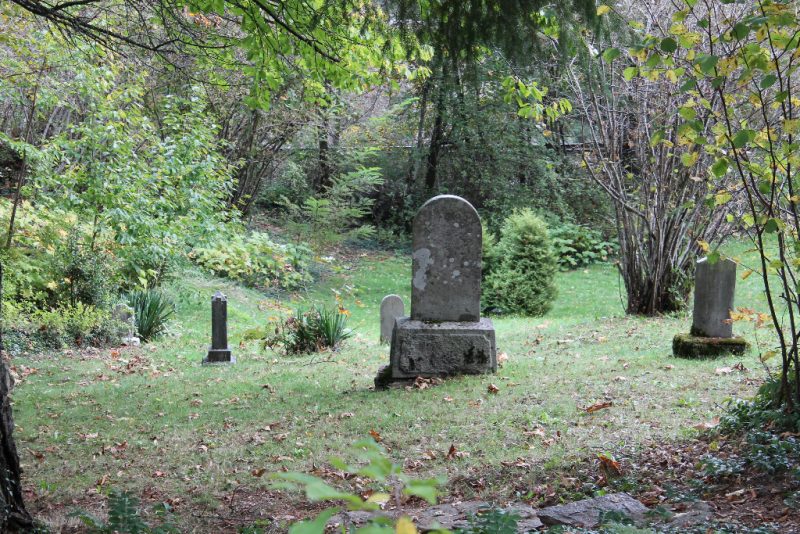 Yale cemetery with CPR mainline behind.

I know that cross-referencing to exact pages can be a nightmare. In this case, helpful references could have included the death year of the person (e.g., “see Fred Jones, d. 1888”), which would help readers focus their searches.

I also wondered about the use of the terms “Indians” and “coolies,” which occur only a very small number of times outside of quotations. I understand that these terms were used at the time but unless we’re quoting directly from an original source that employed them, we should use the terminology appropriate to today, in this case First Nations, Indigenous, and Chinese workers. 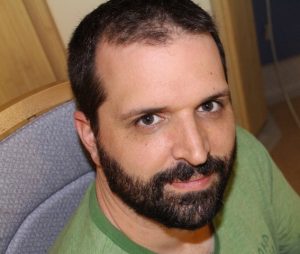 As a lover of cemeteries and someone constantly on the lookout for new and interesting information about B.C. history, I thoroughly enjoyed this book and recommend it to B.C. cemetery aficionados and to anyone interested in the settlement history of the Fraser Canyon.

Ian Brown would agree, I think, with cemetery historian W. Lloyd Warner that “The cemetery is an enduring physical emblem, a substantial and visible symbol of the agreement among individuals that they will not let each other die.”[4]

Brown has successfully upheld this agreement by keeping the memories of those Yale pioneers alive.

All proceeds from the sale of this book go to the Yale and District Historical Society. 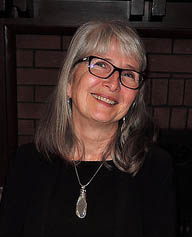 Yvonne Van Ruskenveld is a writer, editor, and historian who has been fascinated by local history since she arrived in Victoria in 1990. A long-time member of the Old Cemeteries Society, she presents tours on a wide range of topics, including women’s history, gold rushes, symbolism, and epitaphs. She is also a member of the Victoria Historical Society and the Western Front Association — Pacific Coast Branch, which focuses on the history of the First World War. “Cemeteries offer a window into the past through the lives of the people buried there,” Yvonne writes, “we learn and understand more about our collective past through their individual experiences.”

[1] Cemeteries. (n.d.) in The Canadian Encyclopedia.