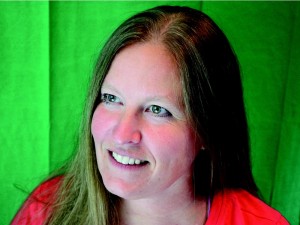 Jennifer Manuel taught school in Kyuquot; her fictional protagonist Bernadette is a nurse.

When a man goes missing, his would-be mother searches for her identity.

Having taught elementary and high school students of the Tahltan and Nuu-Chah-nulth First Nations, Jennifer Manuel has fashioned a debut novel about a woman who has lived for forty years on the periphery of a First Nations community as a nurse in a medical outpost, thereby gaining intimate knowledge of local secrets.

Weeks from retirement, Bernadette, or “Bernie”, hears the news over VHF radio that Chase Charlie, the young man she has loved like a son, has been missing for a full day. The whole reserve comes together for the search.

In a world “too small for secrets,” without any immediate family of her own, Bernie must simultaneously come to terms with her middle ground status on the Tawakin reserve in The Heaviness of Things that Float (D&M $22.95), searching for her identity. Although she’s an unofficial family member, no matter how many wounds Bernie treats, her identity remains in flux.

There is very little privacy on Tawakin. Everyone uses the VHF radio to talk to one another, with one open channel serving as the phone system. Gossip on the island travels at light speed. And yet secrets persist. The missing man’s father is Frank Charlie. But there’s also Jimmy Charlie, whom Bernie’s medical records list as Chase’s father.

Nan Lily, the octogenarian who runs a store out of her basement, also has secrets, kept in the form of stories. The living power of stories is everywhere; they hang on the wind and grow in the ground. So it is that each secret forced into the sunlight by Bernie’s search for Chase comes as a story.

Tawakin residents tell stories in circles. So, too, does Manuel’s novel circle around, coming back to characters and locations. Maybe it’s the size of the island, maybe it’s the tides. Be it bottles or old wounds or bodies, everything comes back eventually.

Beyond the secrets and the gossip, there are traditional stories that circulate on the island. Some say the men who beat their wives get sent away to the woods, where their skin thickens into bark. Some say the ones who get lost at sea become puukmis, growing hair all over their bodies to stay warm.

Bernie’s replacement is a young woman named Wren. Like many who came before her to the island, she is convinced the residents need saving. She’s ready to rally for the cause. But do the people of Tawakin need saving? More importantly, do they need saving by some outsider?

In the 1990s, Manuel, a non-aboriginal, worked for the Ktunaxa Treaty Council in eastern British Columbia, during which time she chaired a national committee on Aboriginal archives, advocating alongside Ktunaxa, Cree, and Mi’kMaq groups for the repatriation of all archival photographs depicting sacred First Nations’ activities. She then worked for three years alongside non-profit Aboriginal groups in Vancouver’s Eastside to develop and deliver education to vulnerable adults, later expanding this work to include the Native Women’s Association of Canada.

Manuel’s activities in Vancouver led her to work as a teacher of Aboriginal children in Kyuquot, a small boat-in-only community on the northwest corner of Vancouver Island where she was adopted by the John family. The elder Kelly John gave her the name aa ap wa iick which means, “Always speaks wisely.”

Manuel has since done graduate work in Aboriginal education. Much of her fiction examines the relationship between aboriginal students and a non-aboriginal teacher. A mother of three, she is the daughter of Lynn Manuel (1948-2010), who published books for children. 978-1-77162-087-1

One Response to “Bernadette’s peripheral vision”