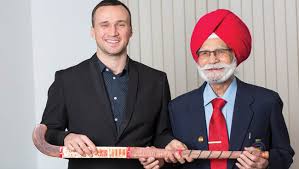 At 92, Balbir Singh Sr. of Vancouver has become the subject of a wide-ranging biography by Patrick Blennerhassett, A Forgotten Legend: Balbir Singh Sr., Triple Olympic Gold & Modi’s New India (Now or Never Publishing $24.95), that draws attention to his status as a triple gold medalist for field hockey, part of a team that earned India its first Olympic gold medal at the 1948 Olympics in London, during which the new nation of India beat its former colonial masters in the final. Balbar Singh Sr. subsequently led India’s team for gold medals in 1952 in Helsinki–as both team captain and India’s flag bearer–and in 1956 at Melbourne–again as India’s flag bearer. His five goals against the Netherlands in the 1952 final remains an Olympic record. Only racist politics prevented him from competing in a fourth Olympic Games in 1960. As a Sikh in Hindu-dominated India, he can be likened to the sprinter Jesse Owens who startled Hitler at the 1936 Olympics in Berlin. Singh Sr. first visited Canada in 1972; he coached and managed India to a World Cup field hockey title in 1975. His scoring prowess finally earned him a belated Lifetime Achievement Award at the Hockey India annual festivities in 2015. 978-1-988098-10-4