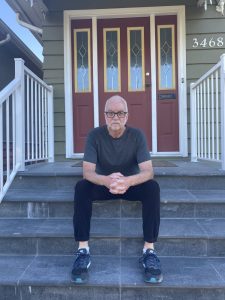 Each story encapsulates a slice of the lives of characters sparely drawn who are usually stuck in troubling if not downright perilous situations. Like the fireman and his wife, a nurse, who are about to have a child while living in a neighbourhood terrorized by homeless people in The Unravelling.

McLellan injects humour, mostly black, which enlivens his dark tales. He also adds sharp commentary on contemporary issues, such as this backdrop in Neighbours, about a diverse collection of people who come together to help a homeless woman (the homeless are a major feature in McLellan’s book):

“Below the window facing west is a rundown rental owned by an offshore investor — dirty money, say know-it-all neighbours. A shady property manager expedites minimal repairs and collects the rent. The tenants on the main floor come and go with some frequency. There’d been a lovely family of Eritrean refugees who were followed by a nice couple from Iraq whose young son had eyes as green as a coral sea.”

Also included in this scenario is a family from Hong Kong, successful enough that the mother can stay home to raise the kids. And there is also Augie, an indigenous, sometime longshoreman who lives in a basement rental. “He’s a good man,” writes McLellan, adding “he’s always happy to lend a hand to his non-Native neighbours, whom he only half-jokingly refers to as ‘tourists who’ve overstayed their visas.'”

A major theme runs throughout McLellan’s neo-noir: wounded people struggling to make their way in a difficult world.