The Promise of Paradise shows idealists have long fled to the west side of the Rockies. 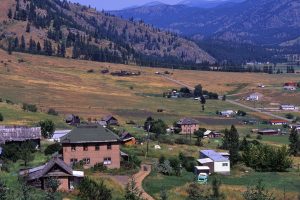 Hardy Mountain village near Grand Forks. The pacifist Douhobors were admired and funded by Leo Tolstoy.

REVIEW: The Promise of Paradise: Utopian Communities in British Columbia Given how life imitates art, it’s no surprise that dispossessed people in search of societal perfection should find themselves in the middle of nowhere. That’s certainly where journalist Andrew Scott encountered most of the predominantly communal societies surveyed in a recently expanded and updated edition of The Promise of Paradise: Utopian Communities in British Columbia (Whitecap, 1997).

Scott returns here to many of the utopias he visited during his original research. Several are still intact, some even flourishing, while others are plugging along, “struggling to maintain their culture,” and “tenaciously clinging to their remaining strongholds,” as he notes in the preface.

For the most part, the stabs at perfection went nowhere. “Ultimately, all utopias are doomed,” Scott writes starkly. The value is in the journey, he says, calling utopian communities “living laboratories” for “trying to invent improved versions of ourselves so that we can survive and evolve as a species.” For people who don’t mind a little solitude, or who even crave it occasionally, the idea of living shoulder-to-shoulder with perfect strangers in an intentional community hardly seems idyllic. The societies not run by autocrats, operating instead on a consensus model, tended to collapse under their own weight. “Modern intentional communities often place a heavy emphasis on co-operation, consensual decision-making and shared responsibility,” Scott writes.

The trouble is that the process “can become so drawn out that the wheels grind to a halt.”

But beyond being “not for everyone,” communal living is something people fear and, “because North American society is hostile to anything that threatens privacy and private property, early utopian communities were forced to B.C.’s margins.”

Consequently, Norwegians settled at Bella Coola, Finns attempted a utopia on Malcolm Island, Danes flocked to Cape Scott on the northern tip of Vancouver Island, and the Doukhobors arrived in the Kootenays from Russia by way of Cyprus and Saskatchewan. Each remote locale represented “a blank slate where any number of ambitious schemes might take root and flower.”

The weeds, though, typically proved overwhelming as did the snakes — and the snake-oil merchants drawn to B.C.’s margins of remote islands and interior valleys.

Most British Columbians will be familiar with Brother XII and his following on De Courcy Island and environs. The Promise of Paradise devotes a whole chapter to Brother XII (born Edward Wilson in England in 1878), mostly drawing on John Oliphant’s 1991 biography, although Scott also weaves in an account of a kayak trip he and a companion made to the scenes of the cult leader’s crimes. Scott’s forays included visits to what may or may not have been the abode of the tyrannical Madame Zee, Brother XII’s partner in crime, and the House of Mystery, a shack where Wilson meditated and received his inspiration.

Oh, and Scott met a man who admitted he had been searching twenty years for Brother XII’s legendary trove of gold.

Scott presents a good primer on the legend, even if he fails to remove its shroud of mystery. For Scott, Brother XII is a cautionary tale: “He represents what can happen if people hand over their free will when joining a collective enterprise.”

Less malevolent forces proved the downfall of most utopian societies. The Danish experiment at Cape Scott foundered in part because it couldn’t support its clergyman. The nearby Norwegian settlement at Quatsino withered because the provincial government failed to build a promised road — although a small village survives to this day.

A common thread of the communities is religious, or at least spiritual, devotion of a Calvinist bent. Even the putatively secular versions often featured painstaking toil. The 55-hectare Woodshare Farm near Lumby required a $2,000 ante for new members who were expected to work fifty hours a week in exchange for a $3 weekly clothing allowance and “a balanced vegetarian diet and comfortable shelter.” A few utopias experimented with free love and polygamy, and Scott tells of high-spirited young women from a farm at Galley Bay skinny-dipping out to greet and annoy boaters on Desolation Sound.

The Sons of Freedom sect of the Doukhobors also discovered the shock value of nudity, as well as of bombings and arsons. It certainly caught media’s attentions, although Scott carefully stresses that the sect represented a small fraction of the Doukhobor communities.

Nevertheless, the Sons of Freedom originally “served as the community’s conscience, criticizing worldly trends,” before being moved to direct action, which included burning down their own homes. Of the Doukhobors generally, Scott argues, their social and economic structures, including their “large community homes,” were similar to those of More’s Utopia itself. No universal standards exist for classifying utopian societies, Scott admits. So he invents his own classification, defining all his utopias as “created with deliberate intent; none were accidental or haphazard.” Nonetheless, some of his examples don’t fit with the rest. The Nisga’a people of the Nass Valley, for example, had already occupied their place for thousands of years — time immemorial, as their elders would say — before negotiating and enacting the treaty that returned self-government to them.

Scott observed such a vast improvement in the Nass Valley post-treaty, compared with what he had seen on a quick visit decades earlier, that he deemed the reborn Nisga’a Nation as worthy of inclusion in his utopian survey.

To quibble further, the book’s first utopian example is another First Nations community, Metlakatla. At least in that case, it was the utopian vision of one man — the Anglican missionary William Duncan (1832-1918). His followers were the Tsimshian people of the vicinity of present-day Prince Rupert.

Duncan aimed to convert them to western civilization — and by the 1870s, he had succeeded in creating a “model Indian village” that became “the world’s most famous example of how Christianity could supposedly transform and elevate First Nations people.”

It didn’t last: Duncan eventually moved Metlakatla to an island of the Alaska Panhandle after the U.S. government granted squatting rights to the villagers. That action came after the Canadian government short-sightedly rebuffed Duncan’s pleas to grant expanded property rights to the First Nations people of the original Metlakatla. While Scott acknowledges that by today’s standards Duncan was autocratic and cruel, the author nevertheless portrays him as figure ahead of his time who cared about the people he was trying to convert — even if he had zero tolerance for such traditions as the potlatch.

No wonder Scott found on a trip to the present-day Tsimshian village of Metlakatla that Duncan remains a polarizing figure.

Also out of place is the attention Scott places on co-housing as a contemporary mode of utopian living. That’s despite his own admission that in expensive Vancouver, the main attraction of co-housing is its affordability. Then again, it fits the overarching theme that a utopia brings together people fleeing adversity of one sort or another.

Scott sprinkles fascinating historic tidbits throughout the book. For instance, we learn that George M. Dawson, the federal geologist who surveyed Cape Scott, is the eponym of Dawson City.

He also reveals that Kalervo Oberg, the anthropologist who devised the term “culture shock,” spent his formative years at Sointula, the Finnish utopia on Malcolm Island. Founded by Matti Kurikka in 1901, Sointula went bankrupt in 1905, although about a hundred of the colonists remained on the island as more traditional homesteaders. Despite their individual independence, they still built such collective amenities as a hall, graveyard, and a co-op store. Among Scott’s many fascinating revelations is how the utopias formed in the first place. Sometimes, the visionary posted a newspaper ad. Scott even did so himself in 1976, in a publication called The Smallholder. His group was proposing an intentional community on Texada Island. The plan went … nowhere.

While Scott clearly has an affinity for utopia seekers, he has his limits. He calls the hippies “America’s children of affluence,” which might be self-deprecating considering he is of similar vintage.

Among the hippie communes was one near Powell River, where Mark Vonnegut, son of Kurt Vonnegut Jr., experienced the psychotic break recounted in the memoir, The Eden Express (Bantam, 1975).

Scott’s fleeting mention of that makes the reader anxious to learn more about that utopian experiment as well as about the home of those young women swimming nude in Desolation Sound.

Perhaps Scott can explore those and other intentional communities in detail in a third edition. A fourth-generation British Columbian, Keith Norbury has worked full-time as a journalist since 1986. His writing has appeared in dozens of publications in Canada and the U.S., including the Globe and Mail, the Toronto Star, and This Magazine. He lives in Saanich, B.C.

7 Responses to “Perfection is hard work”