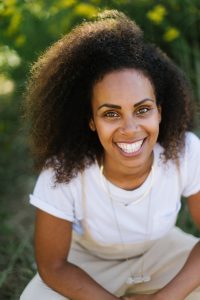 Rachel Ricketts (right) grew up in Vancouver, exposed early to the devastating effects of racism.

“I was aware of the impact of white supremacy on my Black female body from as young as 5 years old,” she says. “In Vancouver in the 80s, [I was] the only Black person, let alone Black girl, in my school for much of my life (including university). My white Kindergarten teacher tried to hold me back a year because, as she informed my white-passing mother, my brain was smaller than my white classmates’ brain (which she had apparently derived from her teacher’s manual in 1989). My mother threatened to sue the Vancouver School Board and off to grade one I went, but I knew I was required to prove my intellect and worth at school from then on. I never felt safe or understood at school, nor did anyone support me in feeling safe or understood. That was precisely why I hadn’t been speaking up in my Kindergarten class to begin with.”

Ricketts eventually went to law school and became an attorney. She also trained for, and works as a racial justice educator and grief coach. This work is “personal” she says, “Because the most grief I have ever endured, and will continue to, is at the hands of white supremacy.” 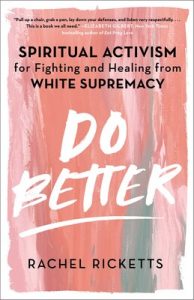 Now she has published Do Better: Spiritual Activism for Fighting and Healing from White Supremacy (Atria/Simon & Schuster $36), offering mindful and practical steps for all people to dismantle white supremacy on a personal and collective level.

It’s intense reading and the way forward to racial justice is not an easy path, she warns: “So let me be clear, this ain’t no cakewalk. Real talk. Learning about white supremacy and doing anti-racist work is work.”

Ricketts writes using African American Vernacular English (AAVE) throughout the book, because as she says “well, I’m Black!” and also because she honors and acknowledges “the Black American, predominantly queer and transgender, communities that created it.” But she adds: “My use of AAVE is not license for any non-Black person to do so and I implore you not to.”

She uses alternative terms such as folx for folks, and adds symbols such as “+” to woman/women because, as she points out in a lengthy glossary, “The “+” is derived from the Bear Hebert to include all those who self-identify as being oppressed by misogyny similar to those who identify as women, including femme, femme-passing, gender non-conforming, nonbinary, agender, genderqueer, intersex folx and all those who live outside of identities that terms or language can describe now or in the future.”

Clearly, Ricketts has studied oppression deeply. “I share my stories not to condemn the mistakes of others but to illuminate the ways we cause each other harm, often to those most oppressed,” she says. “Harms that I too have inflicted as a perfectly imperfect person and oppressed oppressor.”

And when Ricketts takes aim at a group that particularly needs to learn about their role in white supremacy, she does so in no uncertain terms. In particular, she focuses on white women.

“Though this book is meant to inspire healing and change for all humxns, this book is directed primarily to, though not for, white women+,” she writes. “I did not want to write a book to white women+ (truly!), but white women+ have caused me the most racial harm so I feel compelled to address them directly. Especially cis women. Still, this book is for errybody. Every-body.”

Answering questions from BCBookLook by email, Ricketts expands on her focused remarks to white women. “In my personal and professional experience white women+, especially cis white women, have the hardest time accepting and addressing their roles as oppressed oppressors,” she says.

“They are so focused on the ways they are oppressed by patriarchy that they disregard the ways in which they are also oppressors, on the basis of race, toward Black, Indigenous and folx of color. White women+ are also often the most stuck in the need to be seen as “good and right” (which is part of the white supremacist ideal of femininity), and anyone who is committed to being, or being perceived as, good and right is not and cannot be committed to racial justice because this is work that you will undoubtedly get wrong and you will certainly feel bad in some way at some point.

“Learning about the ways in which they have perpetuated and benefited from white supremacy, and caused Black, Indigenous and folx of color harm (not to mention themselves) is no easy task. The work is to partake in those inner healing practices that support you in supporting yourself withstand the full spectrum of your humxn emotions, and transmute them into action instead of apathy, which many white women+ are otherwise often inclined to do.”

The healing starts with individuals coming to their own reckoning, through arduous and ongoing soul work. “Racial justice starts with you and it starts within,” says Ricketts. “There can be no genuine outer shift unless we get right with ourselves first.”

Furthermore, “racial justice requires a major collective upheaval. It necessitates an overhaul of every system we have ever known the world over.”

Hard work indeed but necessary for a more just society.