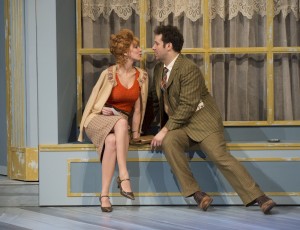 Never mind that the opening scene for Richard Bean’s madcap comedy, One Man, Two Guvnors, is a confusing mish-mash or that some of the dialogue on opening night was muffled by mangled British accents.

Sometimes it’s just all about the performances.

As directed or simply unleashed by David Mackay, this boisterous and bizarre amalgam of Benny Hill-like mayhem, Robin Williams-like manic clowning and farcical echoes of commedia dell’arte is clearly in the running for the feel-good hit of the year. As a chronically befuddled, starving and put-upon butler-secretary-jack-off-all-trades-master-of-none employee of two employers—neither of whom realize he’s moonlighting with a second job—the adroitly kinetic Andrew McNee thoroughly delights and enthrals in the lead role of this comedy that is only very, very loosely based on the 18th century classic The Servant of Two Masters.

The plot is beyond silly. We’re in the beachside town of Brighton, England in 1963. The Beatles are evolving from skiffle band innocence to Hamburg-forged rock. Don’t even bother trying to make much sense of a twin sister pretending to her dead brother. Three couples will be united in the end.

Martin Happer, Andrew Cownden and Ryan Bell are all rivals to McNee for controlled audacity in their supporting roles, making their onslaught of comic turns into a festival of mawkishness. Maybe it was intentional, or maybe it’s just a fluke of chemistry, but the thoroughly charming musical numbers overseen by multi-talented Anton Lipovetsky—in a fab foursome that includes Said The Whale drummer Spencer Schoening on a washboard—obviates the zaniness with dollops of boy band sincerity.

The advent of other actors from the cast as musical guests—all of whom exhibit surprising proficiency—adds enormously to the sheer gaiety of the evening.

The combined silliness of that aforementioned gifted quartet of McNee & Co. harkens back to a gentler realm of comedy along the lines of Danny Kaye and Red Skelton where physical antics and pratfalls took precedence over jibes.

McNee’s ability to toy with an audience will be the highlight for some, particularly when he brings a superbly coy young woman onto the stage; others will go home chortling over Andrew Cownden’s fastidiously keen ability to portray a geriatric waiter with a heart pacer that can accelerate or de-celerate his movements.

Ryan Bell’s deadpan portrayal of a self-fixated Romeo who cares more about behaving like Laurence Olivier than a lover is hilarious; Martin Happer’s ability to portray a staunchly rigid Brit who must evade the police and find true love, while blithely assuming he has everything under control, is brilliant.

There is a dumb blonde—a really, really, really dumb blonde. There are jokes at the expense of Australia and Canada (“It’s like staring into an apology). And McNee’s harried character is so famished he eats a letter.