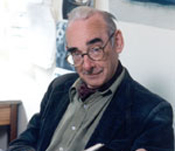 Leonard McCann has died of pneumonia at Burnaby Hospital on Friday, March 27. He was 88.

The Vancouver Maritime Museum Archives are named for Leonard McCann, Curator Emeritus of the Museum. He contributed to many book projects during his many years of association with the Vancouver Maritime Museum, from 1968 onwards, and while overseeing various exhibits and undertaking extensive cataloguing, McCann was the first link in the process that culminated in the acquisition of Captain George Vancouver’s “Arnold 176” chronometer from his voyage to the West Coast as well as material pertaining to Joseph Baker, one of Captain Vancouver’s officers on his 1792 expedition.

McCann wrote the introduction to Gerald Rushton’s Echoes of the Whistle: An Illustrated History of the Union Steamship Company (D&M, 1980) and published his own book that same year on The Beaver, having organized a cross-Canada exhibit entitled The Honourable Company’s Beaver. McCann also co-authored an expanded book on The Beaver in 1991 [See also John McKay and James Delgado] and generated a 25-page booklet depicting fine hobby and original ship and boat models of the Vancouver Maritime Museum, including those ships of significance to the British Columbia area. The models include Roald Amundsen’s 48 ton herring boat ‘Gjøa’ which was first traversed the Northwest Passage in 1872, the 64-gun ‘Wasa’ built by King Gustav II Adolf of Sweden, plus the ‘Amazon’, ‘Ark Royal’ (Raleigh) ‘De Vrouw Hendriena’ 1812, ‘Alma’, ‘Samuel Plimsoll’, ‘Marie Celeste’, ‘Leon’, ‘White Wings’ and the steamers ‘Empress of Japan’ & ‘Empress of Asia’.

In addition, McCann provided the foreword to a re-issue of W.K. Lamb’s Empress to the Orient (Vancouver Maritime Museum, 1991).

Len McCann was born on February 3, 1927, in Shanghai, where his father’s family had lived since the 1860s. Interned in a Japanese prisoner-of-war camp at Santo Tomas in the Philippines from 1941 to 1945, he came to Victoria, B.C. with his mother after the war, sponsored by his aunt and uncle. He worked at various jobs including ship fitter’s apprentice, drapery salesman and Land Registry office clerk before landing work at the new CBC television operation in Vancouver. After a stint at CBLT in Toronto, he returned the West Coast to work for BCTV. A training course for museum workers and archivists led him to work for the Royal Canadian Engineers Museum in Chilliwack. He joined the Vancouver Maritime Museum as an assistant curator in 1968.

“He has helped thousands of people with research,” wrote Joan Thornley, Curator of Collections, in 1992. “He is generous to a fault with his time and knowledge, often putting aside his own pressing work to pass on a suggestion to a visiting scholar or to help a neophyte unravel the mysteries of the Lloyd’s registers.”

To honour McCann, an effort was made in 1994 by Alan Twigg and James Delgago to establish a B.C. Maritime book prize in his honour, but a permanent sponsor could not be obtained. The award was given once for a book by Alan Haig-Brown. Leonard McCann was a recipient of a BCMA award for his publication Ship without a Sail (1971); he served as president of the Vancouver Historical Society 1978-1983 and in 1992 he was awarded the Vancouver Historical Society Award of Merit for his historical conservation of maritime history.

In October of 2014 he was able to attend a reception at the Vancouver Maritime Museum in order to receive the SS Beaver Medal for outstanding contributions to British Columbia’s Maritime Heritage.