B.C. leads the way in homebirthing 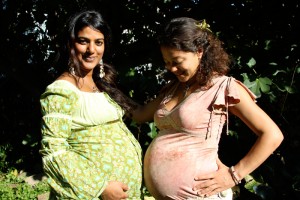 These illustrated memoirs, all by mothers and fathers in British Columbia, are celebratory endorsements of the homebirth process.

Preece’s “manifesta” does not seek to counsel homebirth as the correct option for birth.

“We are not interested in lambasting the medical establishment,” Brownn Preece writes. “In fact, there is much gratitude expressed in these pages for the prowess of doctors who have helped with complications. I am one of those women. Though I birthed at home, I later had to be transferred to a hospital due to excessive bleeding. For the care I received, I am extremely thankful.”

Preece’s inclination to collect and publish these testimonials was inspired by Ina May Gaskin’s Spiritual Midwifery as well as her Birth Matters: A Midwife’s Manifesta. Her new anthology contains numerous perspectives from First Nations parents. As the youngest woman ever elected to the Islands Trust, Bronwyn Preece served two terms on the often fractious board of governance for the Gulf Islands, from 2002 to 2008.

According to Preece’s foreword, the Netherlands has one of the lowest perinatal mortality rates in the world and approximately 35 percent of Dutch births occur at home.

According to Statistics Canada, of the approximately 380,000 Canadian women who gave birth in 2011, only 1.6 percent (just over six thousand) did so outside of a hospital.

B.C. varies considerably from the national average. In B.C., midwives deliver about 5,500 infants each year. That’s about 14 percent of the babies born in the province. Bronwyn Preece also has an extensive backround in theatre.

Approximatly one-third of the babies delivered by midwives in B.C. are birthed at home.

Not merely a hippie back-to-the-lander, Preece has published several peer-reviewed articles in academic journals and her play “Never Cry Dam” won the 2013 Act Now! Sustainability Competition. It was also short-listed for the Earth Matters On Stage Ecodramaturgy Playwriting Competition in 2012.

Also an improvisational performance artist, Bronwyn Preece completed her SSHRC-funded MA and BFA with distinction (both in Applied Theatre) at the University of Victoria from 2007 to 2013. She was awarded UVic’s 2009 President’s Academic Award in the process, en route to pursuing a Ph.D in Theatre in the U.K.

Having a daughter inspired her to write two books for children, The Gulf Islands Alphabet (Simply Read Books 2012) and Off-the-Grid Kid (Eifrig Publishing 2015). Preece lives “off the grid” in a land cooperative in the Gulf Islands of British Columbia that she helped to establish in 2000. She continues to perform and give workshops internationally.

2 Responses to “B.C. leads the way in homebirthing”