O is for Osler 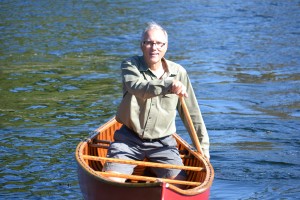 One of the earliest bedtime stories Sanford Osler can recall was Holling C. Holling’s Paddle-to-the-Sea about a First Nations boy who carves a small canoe modelled on his father’s birchbark one and launches it in the water of Lake Superior. The miniature canoe makes it ways through the Great Lakes and eventually reaches the Atlantic Ocean. The North Vancouver-based economist has long since owned a sixteen-foot wooden canoe for more than forty years, having been first introduced to canoeing at a summer camp at Camp Hurontario on Georgian Bay. While serving as chair of the North Vancouver Museum and Archives and also as a trustee for the North Vancouver District Public Library, he has now published accounts of his many journeys by canoe throughout Canada, including the Bowron Lakes, Broken Islands and Gulf Islands, Canoe Crossings: Understanding the Craft that Helped Shape British Columbia (Heritage House $19.95). “When we first moved to North Vancouver,” he recalls, “I saw a canoe called Checkerboard on display at Cates Park. It was built in the 1920s by Chief Henry George of the local Tsleil-Waututh Nation. The canoe, about fifty feet long and very narrow, held eleven people and was described as having won many Indian war-canoe races. I had never seen a canoe like this before and began to research the background of the craft.” While telling the story of the various types of canoes found in British Columbia, he maintains that relatively few people look at the canoe holistically and see the countless ways it has shaped the province.