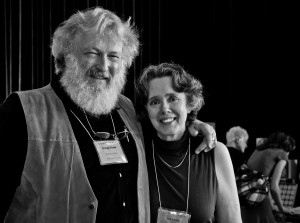 The Alcuin Society has announced Jan and Crispin Elsted of Barbarian Press are the winners of its seventh Robert R. Reid Award and Medal recognizing lifetime achievement or extraordinary contributions to the book arts in Canada.

The Elsteds founded Barbarian Press in Kent, England in 1977 and returned to Canada the following year where they set up shop in Mission, B.C. Poet, typographer, jazz musician, compositor, translator, essayist, Shakespearean actor and theatrical director Crispin Elsted and his wife Jan continue to make books with their private press using old fashioned technology, setting the type, rolling the ink and printing the pages by hand, on handmade paper, having first studied printing with Graham Williams of Florin Press.

The type for all publications produced by Barbarian Press is set entirely by hand. The publication decisions and editing are shared, but generally the design, typesetting and, at times, writing are done by Crispin, and the presswork by Jan. “We are grateful and amazed in equal parts to have been chosen, and we are both proud and humbled to find ourselves in the company of the earlier winners,” Crispin Elsted says. The Elsteds with Maggie in 2012

In 2013, Crispin Elsted wrote on the Barbarian Press website: “I can see, I guess, why some people, in some circumstances, might, perhaps, want to own an e.reader, I suppose. Some people like wearing latex. I once knew a boy who liked to stick stones up his nose. Perhaps this young man likes to put his e.book in odd places. De gustibus non est disputandem [In matters of taste, there can be no disputes].  But just in case some of you have heard this report and are concerned, we would like to assure you that the book is not broken.

“As I write I can hear the Vandercook downstairs rolling out copies of a page from Simon Brett: an Engraver’s Progress. When the sheets are printed, and the book is bound, it will be a carrier of knowledge, a purveyor of information, and a delight to see and to hold and to smell. (Though perhaps regrettably, for some of you who are not regular readers of this site, it will be too big to fit in your nose.)”

Founded in 1965, the Alcuin Society aims to promote a wider appreciation of beautifully produced books. In addition to the Robert R. Reid Award and Medal, the Society also sponsors the Awards for Excellence in Book Design in Canada. The first Robert R. Reid Award for Design was presented to its namesake in 2007 by Dr. Yosef Wosk. The award is given occasionally, as deserving recipients emerge. Previous recipients include Frank Newfeld, Jim Rimmer, Glenn Goluska, Stan Bevington, and William Rueter.