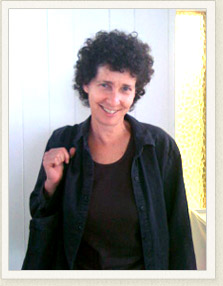 “In all my writing, I explore the slipperiness of morality and identity in the face of extreme loss and threat, though the settings and circumstances change with each novel.” — Nancy Richler.

All of Nancy Richler’s novels were written in Vancouver. The first of these, Throwaway Angels, was shortlisted for the Arthur Ellis First Novel Award. The title and contents refer to Vancouver’s relative indifference to the disappearance of sex-trade workers. When police don’t show much interest in investigating the disappearance of her friend, Gina, who works as a stripper in a local bar, Tova, who manages the Kwik Kleen Laundromat, is forced to undertake her own search.

Set in turn-of-the-century Russia, Richler’s second novel Your Mouth is Lovely imagines the lives of her grandparents. As a Russian Jew imprisoned in Siberia in 1905, Miriam documents her grandmother’s life in a diary format as it becomes the one legacy the antagonist can leave for her daughter whom she has only seen at birth. “Madness, hunger, and cold. Each is our mortal foe, but it is madness we fear most,” the heroine writes. “It hovers in the room, always, like the deadliest of vapors.” This novel received the Canadian Jewish Book Award for Fiction and the Adei Wizo Award in Italy.

Montreal’s post-war Jewish community was the context for her third novel, The Imposter Bride.  Like her novel’s protagonist, Richler’s  own paternal grandmother immigrated to Canada for the purposes of marriage, only to be rejected by her prospective bridegroom at the moment of her arrival in Montreal. It won the 2013 Canadian Jewish Book Award for Fiction and was shortlisted for the 2012 Giller Prize, the Libris Award and the Canadian Booksellers Author of the Year Award.

At 18, Richler left Quebec to attend Brandeis University, then the University of Denver. Having lived with her partner Vicki Trerise for thirty years, she died of cancer in Vancouver on January 18, 2018. [Shelia Berlin photo]

Your Mouth is Lovely (HarperCollins, 2002)