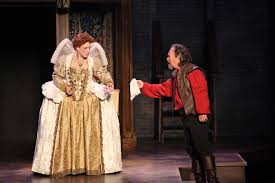 It’s no secret all over town that the rehearsal period for neophyte playwright C.C. Humphrey’s Shakespeare’s Rebel—an historical drama chosen by Bard on the  Beach head honcho Christopher Gaze and then afforded comic touches by Gaze as its director—was an unmitigated disaster.

Possibly Gaze was hoping his lead actor for this summer’s alternating production of King Lear, Benedict Campbell, could single-handedly justify and redeem Shakespeare’s Rebel, given that he would be bolstered by wonderful performances from Colleen Wheeler (Queen Elizabeth) and Jennifer Lines (Tess, the love interest). But without adequate rehearsal time, Gaze must shoulder the blame for this box office disappointment—not the actors. For starters, that title is fraudulent. After William Shakespeare unbelievably appears as a dithering, nervous Nellie in the opening scene, he vanishes from the action. We soon deduce the play is entirely about the life and times of an Everyman soldier/actor named John Lawley.

Lawley is a skilled swordsman who had a brief stint as an actor in some of Shakespeare’s plays before he was pressed back into military service by the Earl of Essex, Robert Devereux. Lawley himself is never a committed rebel. He is mostly trying to renounce both fighting and drinking. His life is largely independent of Shakespeare’s life.

For two, complicated hours we try to make sense of Lawley’s puzzling, fictional relationship with the Earl of Essex, a self-inflated and seemingly stupid nobleman who ultimately staged a brief and Quixotic rebellion against the Queen before he went down in history as the last man to be beheaded in the Tower of London.

We are never told the cataylst for the Earl of Sussex’s revolt against the Queen: Elizabeth the First cancelled his monopoly on the sweet wine trade. So the drama in the second act is largely inexplicable. Shakespeare took liberties with history; so why shouldn’t C.C. Humphreys?

Lawley is a loyal Englishman who merely wants to be left alone so he can court and marry the comely tavern-keeper Tess, the mother of their illegitimate son who is a budding actor in Richard Burbage’s acting troupe that produces Shakespeare’s scripts.

Bits and pieces of Shakespeare’s writing are parachuted into the mouths of the actors, along with references to his plays, but any relationship between the mostly unseen Shakespeare and Lawley is negligible. It’s possible Shakespeare’s Rebel is a somewhat less fraudulent title for Humphrey’s novel upon which this play is based—but we doubt it.

The good news is that several of the actors have struggled very hard over the past month or so to make this show almost palatable. Along with the aforementioned Wheeler and Lines, class acts throughout, Michael Blake is particularly strong as Burbage, so much so that one leaves the theatre wondering why he wasn’t accorded the most problematic role of the Earl of Essex. The less said about the complete failure of this production and script to provide a manly, charismatic and convincing Earl of Essex, the better. By the time the axe is finally raised over his head, the audience is impatient for it to fall.

Particularly in the first act the actors are asked to spend far too much time explaining the back story. The machinations of Ireland and Spain that fuel the historical plot are only loosely referenced. Is this an historical drama or is it a comedy? Christopher Gaze couldn’t decide, or he simply doesn’t know. Chirag Laik was misdirected to portray Lawley’s grown son like a simpering ten-year-old, particularly in the second act. Why? So the audience is left mystified throughout by all the shouting and prancing and mincing. At the centre of it all is Benedict Campbell. In his scenes with actors of comparable dignity and talent, he shines and the language sings. In other scenes, we feel a bit sorry for him, having come all the way to Vancouver to push this Sisyphean boulder of a play. A conclusive scene between Tess and Lawley, when she proposes, is easily the highlight of the evening. Suddenly it appears two characters are deeply connected. Suddenly we feel.