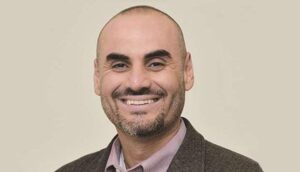 Born in Edmonton in 1977 to a Palestinian family living in exile from their homeland, Dr. Mowafa Househ grew up being told stories of his ancestors. “My name, Mowafa Said Househ, ties me to my family and to Palestine,” he writes in his memoir Under the Nakba Tree: Fragments of a Palestinian Family in Canada (Athabasca University Press $24.99) “That is something no one can take from me.” The term Nakba broadly refers to the destruction of Palestinian homeland in 1948 and the ensuing displacement of a majority of the Palestinian Arabs. Househ, who is an associate professor at U of Vic, describes his parent’s turbulent history as well as his own troubled experiences as a Muslim Canadian. In one lengthy section, Househ writes of the harrowing return to his homeland in 2000 when the Second Intifada was starting and getting caught up in the violent struggles. He eventually earned a Ph.D at U of Vic, married, had a family, and worked in Prince George and Saudi Arabia before returning to Victoria. 9781771992039