Dr. Gregory Betts is the 2022 recipient of the Basil Stuart-Stubbs Prize for outstanding Scholarly Book on British Columbia for Finding Nothing: the VanGardes, 1959 – 1975 (UTP, 2021), a wide-ranging look at Vancouver’s cultural life in those years. Dr. Betts argues the city was a key site then for the cultural transformations spreading across English Canada.

The $2,500 prize, given by UBC Library and the Pacific BookWorld News Society, will be awarded at a reception to be held in April at the Cecil Green Park House.

“The years I spent working on this book were delightfully rich,” says Dr. Betts. “I visited archives and bookshops, met with scholars and writers, as well as people who just lived in the city during the period. What I found was a rich set of memories and jaw-dropping art and literature. What I found surprising and striking, however, was how different everyone’s take was on the story of the ‘60s in Vancouver.” 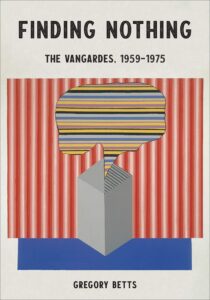 Having collected a vast amount of research material, Dr. Betts says he began to look at focussing almost exclusively on the writing arts. “I say ‘almost’ because the avant-garde writing of the period was so consciously interdisciplinary, pushing new boundaries, and creating new spaces for intersections of art and life that all manner of other disciplines inevitably intersect. Writing and what it meant to be a writer changed over the years of this book, and I wanted my project to reflect the dynamic nature of the community at the time. Indeed, my hope is that this book makes it easier for others to delve into the wealth of world-shifting work that emerged in Vancouver during those years.”

The other two shortlisted titles for the prize are:

A Long Way to Paradise: A New History of British Columbia Politics by Robert A. J. McDonald (UBC Press, 2021).

Dr. Betts is a poet, editor, essayist and professor in the Department of English Language and Literature at Brock University with a specialty in Canadian and Avant-Garde Literature. Born in Vancouver and raised in Toronto, he graduated from Queen’s University with a BA in English in 1998; studied with, among others, George Bowering at the University of Victoria where he completed an MA in 2000; and received his PhD in English literature from York University.

Dr. Betts has taught literature at four different universities in Canada and Germany. He has published five books of poetry, and edited five books of experimental Canadian writing, including Avant-Garde Canadian Literature: The Early Manifestations (UTP, 2013).