Money is our underlying great divide

Co-written and co-performed by two friends, Winners and Losers has been described by the New York Times as “a frisky theatrical symposium” and “articulate, funny and breezily charming.” 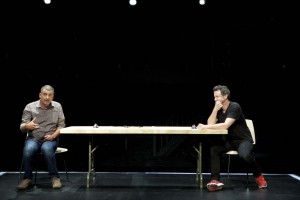 Marcus Youssef and James Long butt heads and ethics in a play about competition and money.

Like so many friends, James and Marcus are certain they have interesting conversations. They invent a parlour game in which they toss out subjects at random and judge them as winners or losers.

As both are well-connected theatre professionals, they decide to transform their two-man debating game into a two-man play called Winners and Losers (Talonbooks $16.95) during which they will appear to debate the pros and cons of, well, just about anything.

After drawing a chalk rectangle, the actors and co-authors Marcus Youssef and James Long, casually dressed, simulate off-the-cuff debates on a bare stage, sitting across from each other at a table, using that table for a ping pong game to seven points, then removing it entirely.

They accept one topic per night from the audience to appear spontaneous. Lack of a conventional plot makes the audience nervous. As they barge ahead into world politics and history, we begin to worry these two guys might not be quite as smart as they like to think they are.

Their opinions are just not that interesting. Stephen Harper is called a winner, without any debate. Being guys, they each open a beer and their banter turns into a proverbial pissing contest. They attack one another’s integrity. Who is more inventive?

The awkwardness of a faux wrestling skirmish contrasts with the conceit that their dialogue is unrehearsed, so we start to look askance. But our inclination to distance ourselves from this onslaught of male posturing suddenly evaporates as soon as our debaters start to talk seriously and candidly about money.

It’s at this point that Winners and Losers shifts into a higher gear, and none too soon.

The late Jane Rule, a novelist and moralist, used to say that money is something that people should discuss more openly, more often. It’s a huge part of life and yet, in many households, it’s kept secret. In keeping with the mandate of Theatre Replacement to build performances that react to contemporary existence, Winners and Losers is ground-breaking when these two friends honestly debate their economic differences.

Both men live on the east side of Vancouver. Both are married with two children. One drives a Mazda, the other a Toyota. They appear to be theatrical brethren. But their economic differences lead them to make accusatory attacks.

Marcus’s father has been the vice-president of a Canadian bank. Even though Marcus likes to shop for clothes at Value Village, and he works as a community activist for COPE, his family has easy access to airplane tickets and he is going to inherit lots of dough. Although he is the son of an Egyptian immigrant, he comes from a privileged background. His father helped him buy a house.

James wears $200 jeans but he rents. James’ father was an ex-cop who called his wife Shithead in front of his sons. Marcus has cocktail smarts, enabling him to schmooze at parties at the American consulate, whereas James tells a story about hanging out with First Nations guys in a bar, almost getting into a fight, thereby boasting about his street smarts.

We want to accept James’ argument that privileged Marcus works with COPE out of residual guilt. But then Marcus points out that the combined income for James’ household is $120,000 per year. This information pops the bubble of the staged conflict.

Obviously both men are leading comfortable lives compared to most people in the Downtown Eastside community in which the play was presented during the PuSh Festival (in the revamped Woodward’s complex), but anyone who has the smarts to successfully earn a full-time living as an artist is, when one stops to consider the number of people who would like to do so, a relative aristocratic.

Our truth-daring creative types are doing quite nicely, flying off to festivals, etc., so their attempts to claim the higher moral ground over one another are arguably contrived. But, for that matter, on a larger demographic scale, most people who can afford to live in Vancouver is part of an elite constituency.

Forced to admit that he comes from a monied background, Marcus agrees to give James some of his inheritance. Unfortunately it is not specified how much will be given, or how much money Marcus could inherit. The audience is left wondering whether such a promise was ever made in ‘real life,’ and whether or not this act of generosity arising from guilt will ever come to pass.

We have to ask ourselves: If the promise to share the wealth has not been seriously made off-stage, and if this promise is therefore a theatrical contrivance, does that make Winners and Losers into a phoney play?

This intrigue—even if it’s inadvertent on their part—sets our minds racing in new directions. What is going to happen to this relationship between James and Marcus now that it has been redefined in terms of class warfare? It this play ends with the two friends estranged from one another, and angry, could that be for real?

We are most grateful when they retain this adversarial distance during the curtain call, rather than hugging one another and grinning at the audience. But how much of the verbal boxing is bogus?

It ends up being a fascinating, disturbing and original experience.

It is easy to imagine a second act for Winners and Losers, introducing wives and children, during which one of the friends is forced to consider saving the other from financial ruin.

More importantly, Winners and Losers forces us to imagine ourselves having similarly invasive encounters with our own friends.

You know who your friends are, sings Chrissie Hynde. They’re the ones who want you to go far. So who are your real friends? And why don’t more people decide to share their assets? Rather than lend money to friends, why not give?

The further away we get from the performance, the more the content of Winners and Losers enriches our lives. If you see this play you will want to talk about immediately. It’s a winner. 978-0-88922-932-7