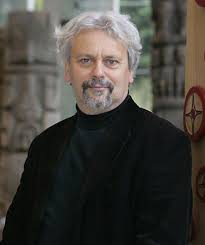 A book about  popular Portuguese artworks by Anthony Alan Shelton captures the playful, subversive culture of a nation forever trapped between land and sea, salvation and damnation.

Heaven, Hell and Somewhere In Between (Figure 1, $45.00) is a companion piece for a major exhibition that opened in May 2015 at the Museum of Anthopology. The book combines an in-depth analysis of Portuguese art and culture with photographs of 40 artworks—ceramics, masks, puppets—and another 60 supporting images from
medieval frescoes, roadside icons, graffiti, and images of carnival performers and artisans at work in their studios.

Complex, contemporary, theatrical, political and often controversial, this is the theatre of a nation, where official ideologies collide with homegrown creations and spew forth deeply felt emotions; from ecstasy and transcendence to suffering and penitence.

Shelton is director of the Museum of Anthropology and a professor at the University of British Columbia. He has long been fascinated by the changing practices of collecting and exhibiting art & artifacts and has published numerous works on the subject, as well as on various aspects of Mexican ethnography and cultural history. He has also published extensively on critical museology, collections’ history and the anthropology of Latin America.

Shelton co-authored a tribute to the museum with Carol E. Mayer entitled The Museum of Anthropology at the University of British Columbia (D&M, 2010) to accompany its redesign and opening in 2010.