Captain James Cook's mission to find and chart a route through the NorthWest Passage was the 18th century equivalent of a trip to the moon. 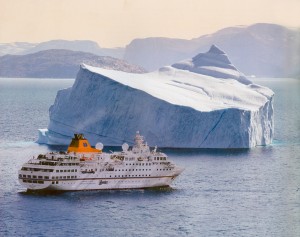 No voyage has ever surveyed so much territory as Cook’s final Pacific voyage that reached Nootka Sound in 1778.

On his third and final voyage, the great, dispassionate mariner James Cook navigated between 49º S in the Antarctic to 70º N in the Arctic.

Now scholars have produced a handsome, 428-page assortment of eighteen essays that explore the scope and grandiosity of Cook’s most northerly adventure–Arctic Ambitions: Captain Cook and the Northwest Passage edited by James Barnett and David Nicandri (Heritage $59.95).

Generously illustrated with maps, archival sketches, paintings and recent colour photographs, Arctic Ambitions: Captain Cook and the Northwest Passage is the literary companion for a 7500-sq.-foot visual exhibit of the same name that can be viewed at the Anchorage Museum at Rasmuson Centre in Anchorage, Alaska until September 7. Presented in partnership with the Washington State History Museum, the exhibit will re-open in Tacoma, Washington from October 16 to January 10, 2016.

Numerous canadian and British Columbian contributors to the exhibit and book include Barry Gough, I. S. MacLaren, Richard Inglis and Robin Inglis.

University of British Columbia’s Rare Books and Special Collections Library is among the contributing organizations that range from New Zealand, Australia, Russia, Norway, England and the United States.

James Cook was a Yorkshireman who rose from humble agricultural origins to work in the merchant navy. He rose in the officer ranks of the British Royal Navy during the Seven Years’ War (1756-63).

Arctic Ambitions offers wide-ranging essays about preparations for Cook’s third voyage, the prevailing views of the Spanish, Norwegians and Russians, the advances in the use of astronomy and surveying equipment on land and sea, and the analysis of sea ice and of trading customs.

A prologue by Nicholas Thomas, professor of anthropology at the University of Cambridge, deals effectively with how Cook’s two earlier South Pacific explorations and how his subsequent murder by stabbing at Kealakekua Bay in Hawaii in 1778—after he’d sailed north—have tended to overshadow Cook’s third North Pacific Voyage.

Cook is presented as a remarkable mapmaker, navigator, explorer and captain who grew so vexed with the civilian (and often well-connected) botanists and other gentlemen gardener/philosophers who were embedded on his ships that he refused to have any such with him on his third and final voyage.

Instead, Cook appointed other people under his command to try their hand at scientific collecting instead. They were all sent out with the Carl Linnaeus classification mantra ringing in their ears: Animal, Vegetable and Mineral.

Cook’s expeditions were also required to make observations about People: their numbers, customs and friendliness (or lack thereof). Cook himself was very interested in customs. We learn he once appalled his fellow officers by stripping to the waist and letting his hair hang loosely to better fit in during a tribal ceremony in Tonga.

A terrific chapter, ‘A New Look at Cook: Reflections on Sand, Ice, and His Diligent Voyage to the Arctic Ocean’, by David L. Nicandri, co-editor of this book and retired director of the Washington State Historical Society, offers a lively account of the frustrations Cook endured in his attempt to tackle the western route beyond the Bering Sea.

Cook’s Arctic ambitions came to an icy, grinding halt because he relied on a fanciful map which all sorts of important people had naively approved.

Imagine trying to find a Northwest Passage when Alaska is whimsically depicted as an island!

Prior to getting as far as Prince William Sound, Cook sailed into Friendly Cove on Nootka Sound for repairs and to rest his crew during the month of April, 1778. Also on board were midshipman George Vancouver and a young master, William Bligh.

Richard Inglis, former head of anthropology at the Royal BC Museum in Victoria, has contributed the chapter ‘Encounters: View of the Indigenous People of Nootka Sound from the Cook Expedition Records’ which contains accounts of the trading process and the concept of private property.

The many contributions to the book by the ship’s artist John Webber are especially strong in his depictions of the Nootka encounter. Inglis offers valuable critical insight not only to aesthetic deletions and embellishments applied after the original sketches (in the form of exotic engravings and paintings), but also to the four editorial stages a ship’s log would typically take before being published as the factual account of a voyage. The edited accounts sold very well indeed; the more lurid, the better.

Inglis and Gudrun Bucher conclude the anthology with a contemporary view of the far north in ‘The Arctic in Focus: National Interests and International Cooperation.’

The beauty of a well-edited book, if I may paraphrase Forrest Gump, in that there is something for nearly every kind of reader.

With its footnotes and scholarly intellectual rigour, Arctic Ambitions succeeds in being thoroughly engaging by virtue of its variety.

Given that Canada and other circumpolar countries are putting forth their claims to the untapped resources of the Arctic, and given the relentless fall-out of environmental pollution and the pace of climate change in the true North, this timely book affords a well-grounded cultural, historical and political underpinning for what southerners need to know.

Whether you are a Captain Cook fan or a Captain Cook debunker, an activist concerned with colonialism or—like me—someone fascinated by All Things Arctic, Arctic Ambitons will get you dreaming of someday travelling by boat through the Northwest Passage.

Currently based on Lennard Island, Caroline Woodward has been a relief lighthouse keeper for seven years. Her eighth book, a memoir, is forthcoming from Harbour Publishing in 2015.