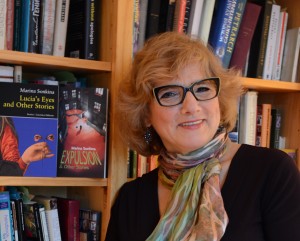 Marina Sonkina grew up in Moscow, about two kilometres from the Kremlin on a famous street called Arbat, which is more than 500 years old. Pushkin’s house was located next door to her school and another famous Russian poet named Bely lived half a block away. Her house still stands near the famous Praga Restaurant at Arbat 2/1 and the Gruerman hospital.

Rybakov’s anti-Stalinist trilogy “The Children of Arbat” describes the destinies of “Arbatians.”  The celebrated Russian singer Okudzhava has rhapsodized the whimsical soul of Arbat in his songs and poems. At the feet of his monument on Arbat young poets have staged literary bashes under the increasingly malevolent shadow of Putin. Few B.C. writers can match the verve and intelligence of Marina Sonkina who lectures for UBC and SFU.

Sonkina has described life on Arbat Street in a short story called ‘A Room between The Two Gogols’ in her brilliant fiction collection, Expulsion and Other Stories (Guernica 2015). Two-thirds of Expulsion consists of Chekhovian tales of survival set in the Soviet Union, but the longest and first story, ‘Face’, is a 65-page novella about Vancouver—and its apocalyptic ruin. This novella reflects the craziness of the Vancouver real estate market. Should we add that Sonkina also has a 6’6” son named Yuri Kolokolnikov who played Stryr in Game of Thrones? [ALL CONTEMPORARY PHOTOS BY LAURA SAWCHUK]