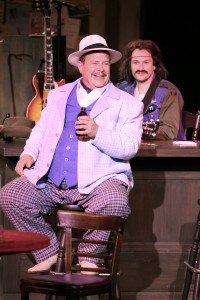 This is a show that knows what it’s doing throughout. Nearly every actor is confident enough to embellish their roles. The lightweight musical numbers are always just the right length. There is such a surfeit of small surprises, a pratfall here, a nudge nudge wink wink there, no one wants to look away. Ashley Wright’s rotund and mincing performance as the dishonest rascal Falstaff is entirely worthy of reprise, especially during the opening of the second act when he takes control of the stage with galvanizing ease.

We also have the brilliant Scott Bellis as the vengeful husband Ford, crooning a weirdly off-kilter version of Your Cheating Heart by Hank Williams, starting out weak in order to end strong.

Jennifer Lines builds upon her exceptional performance in the otherwise uninspired Romeo & Juliet with an almost-as-memorable turn as the effervescent go-between Mistress Quickly.

Daniel Doheny, who arguably should have been cast as Romeo, fits the part of the endearingly youthful suitor Fenton. Better still, he gets to add his rudimentary chops as a drummer—way cool—in the makeshift bar band. Katey Wright and Amber Lewis make for a strong pairing as the smarter-than-all- the-men merry wives. Andrew Chown contributes a weirdly over-the-top depiction of a francophone as Doctor Caius and Ben Elliott similarly accentuates awkwardness for comic effect as Slender. In an ideal world, memorable and bizarre could be synonyms.

Another one of the countless charms of this production is that musical director Ben Elliot, who doubles as Slender, has managed to produce thoroughly pleasing music with a host of actors doubling as musicians. Among the tunes are These Boots Are Made for Walkin’ (Nancy Sinatra), Ramblin’ Man (Allman Brothers) and that cheesy classic Baby Don’t Get Hooked on Me (Mac Davis).

Do we need to mention the plot? Pompous but poor Sir John Falstaff shows up in the colony of Canada at the Garter Inn and lets loose his plan to seduce and swindle either Mistress Ford or Mistress Page. He writes the same love letter to each one. They confide and decide to teach him a lesson. The ‘merry wives’ easily confound the men, including the jealous but otherwise insensitive husband, Mr. Ford.  Pure, young love generates a happy ending.

It all starts before the 7:30 showtime. The completely believable, late-‘60s guitar player who doubles as the host of the Garter Inn, Anton Lipovetsky, with with regulation Burton Cummings mustache [photo, top right, with Ashley Wright as Falstaff] tunes up his axe (that’s what we called them), noodles a few rock riffs, and ignores the audience as they filter into the theatre.

We have entered what looks to be your classic, old style Legion hangout, complete with stubby beer bottles. We see a moosehead on the wall, a drum kit, and a Union Jack along with the new Canadian flag. An old guy hobbling on a cane appears. He nods briefly to the self-involved guitarist, then gingerly climbs onto the stage to take his place as the bass player….

So even before we get a word of Shakespeare—and before we are forced to endure a ten-minute detour as Bard Corp. unctuously introduces the head honcho of the Vancouver Wine Festival who proceeds to regale us with a Donald Trump-like, self-congratulatory speech about the greatness of his festival, not unlike Trump recently trumpeting the superiority of his Scottish golf course, and we then are invited to ooh and aah because they are hoisting a gigantic cheque, whereupon Bard master Christopher Gaze oozes an incoherent, unfinished sentence, “It will be the children of British Columbia…” —we get a clear indication of where director Johnna Wright is coming from and where this production will be headed.

That old guy taking his place in the band to make Friday night music with the young guitar wiz with his regulation, sleeveless jean jacket and regulation Burton Cummings-like moustache and headband represents the melding of all ages and types to make a community. Wright spells out her vision in the program notes.

“To me, the play is built around an idea of community. The many ‘misfits’ – Falstaff included – are an integral part of that community and are loving mocked along with the rest. No one is exempt, yet in the end, everyone is accepted, warts and all. To me this reflects, if not a reality of Canadian culture, at least a way I think we’d like it to be.”

Her intelligence resonates in this production.