The life of a girl in a time of world war and family pressure to conform. 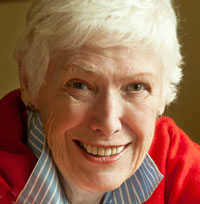 It was a time of big bands, an uncrowded B.C. coast, a war weary world and young love.

Meg is 17, going into her last year at high school. She is determined to graduate and forge a career for herself. There is family pressure not to succeed, not to waste time and money on an education—because she’ll just wind up getting married anyway. It’s the 1940s. She is not supposed to have both.

Meg is not like her cautious best friend, Amy Miller. Meg is curious. Her body is starting to confuse her, but her head still rules. She is determined not to be forced into anything that doesn’t feel right.

Around her she sees adults behaving badly. In a coastal town called The Landing (think Sechelt or Gibsons), the adults all seem to be having affairs, contemplating divorces, sharing the same lover and fighting with their spouses. Her small community is a mini-Peyton Place, stirred up by one family of males in particular—the Pryces.

Meg takes up with Glen, one of the younger Pryces, because he’s handsome. He also seems different from his father and his brothers and his half-brothers. Less reckless. At first he appears happy to be just ‘friends.’ That doesn’t last. Meg is busy working part-time at a lodge for the summer, dancing to the tunes of Glenn Miller and Count Basie in the evenings, learning to play tennis with Glen, and missing Amy, who has gone off to Vancouver. While working for Mrs. Hanson at the lodge, Meg meets her son, Bruce. Older and sometimes rude, stand-offish and abrupt, Bruce has been sent home from the war, badly burnt in a torpedo attack and still only partway through his treatments.

Bruce begins to interest Meg. She is turned off by Glen’s sexual aggression.  There are other boys in the picture as well: Meg’s brilliant chemistry partner, Jack, who has just arrived in the area, and a young man serving in the war whom Meg agreed to take on as a pen pal but discouraged once he began seeing the correspondence as a prelude to something more.

That’s the set-up for Mary Razzell’s ninth young adult novel, Taking a Chance on Love (Ronsdale Press $11.95) , an engaging narrative that emanates a strong sense of place and of time—the daily arrivals of the Union Steamships, the boating and beach activities. It was a halcyon world in a time when young people could walk miles along country roads and parents never worried where their children were.

The story is poignant because the heroine’s seemingly perfect time existed when a world war was decimating an exhausted world. Girls such as Meg had far fewer opportunities to choose the direction of their lives. It is difficult not to presume that much of this convincing story is autobiographical.