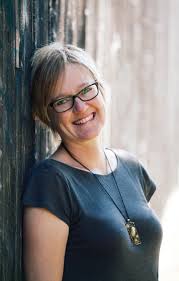 Victoria’s Poet Laureate (appointed in 2015 for a 4-year term) also writes creative non-fiction. Yvonne Blomer’s recently published Sugar Ride: Cycling from Hanoi to Kuala Lumpur (Palimpsest Press $19.95) chronicles her three months spent cycling with her husband through Southeast Asia. A type one diabetic since childhood, she describes the daily challenges of her chronic illness in this memoir as well as her passion for cycling. Passages abound with a combination of pain and found beauty. Take for example, Blomer’s first encounter with a mountainside of tea bushes on a day when she got off her bike and hiked: “I am dizzy and shaky now, an unrelenting pressure throbs in my head and behind my eyes but I am determined not to miss anything… We climb up to the look-out and cast our eyes over the green hillsides. I have never seen tea bushes before. They are a dark, rich green and even from this distance the strong aroma of tea wafts toward us on the humid air. I breathe in deeply. It is like inhaling a hot cup of tea.” Born in Zimbabwe, Yvonne Blomer came to Canada at age two. She completed a Master’s degree at the University of East Anglia. She organizes the Planet Earth Poetry Reading Series in Victoria. This led her to co-edit with Cynthia Woodman Kerkham, Poems from Planet Earth (Leaf Press 2013) featuring 117 poems from the Planet Earth Poetry platform in Victoria that is named after the late P.K. Page’s poem titled Planet Earth. Blomer’s first book of poems, a broken mirror, fallen leaf (Ekstasis 2006) was shortlisted for the Gerald Lampert Memorial award. 978-1-92679439-6