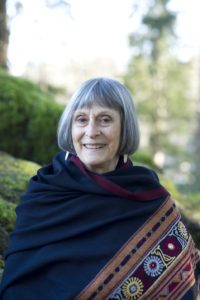 In 2017, songstress and poet Pauline Le Bel has launched a series of reconciliation events in collaboration with the Bowen Island Arts Council and the Bowen Library. The first event of Knowing Our Place: A Reconciliation Initiative was The Blanket Exercise as a way to experience the effects of colonization, the Indian Act, and residential schools. The second was Building Bridges Through Art, with presentations by Squamish Nation artists and storytellers.  She’ll be at the Canada Day celebrations at Crippen Park on Bowen Island at the Reconciliation Booth.

April 22 –  workshop at the Earth Day Celebration
Royal BC Museum Victoria, BC
April 30 – The Blanket Exercise, part of my Knowing Our Place: A Reconciliation Initiative on Bowen Island, a series of cultural and educational events to learn the true nature of our historical and contemporary relationship with
Indigenous People. Gallery at Artisan Square 2-6 pm
May 12-13 – Becoming Intimate with the Earth workshop– Nanaimo, BC
To register: www,bethlehemcentre.com
May 26 – Knowing Our Place: Building Bridges Through Art. Squamish Nation storytellers and artists at the Gallery at Artisan Square on Bowen Island. 7:30 p.m.
July 1 – Canada Day celebrations at Crippen Park, Bowen Island. Noon – 3 p.m. Come to the Reconciliation Booth to talk about how we can move forward.
July 30 – launch of my first book of poems, They Ask Me Why I Sing So Loud
published by Collins Foundation Press. Rustique Bistro, Bowen Island 3 – 5 pm.
Music, refreshments and a reading from the book
October 30 – launch Whale in the Door: Re-Imagining Howe Sound
published by Caitlin Press. The Art Gallery at Artisan Square 3 – 5 p.m.

Meawhile Le Bel has published They Ask Me Why I Sing So Loud (Collins Foundation Press, California, 2017). It opens with a hymn to creation, to planet earth, to our common mother Gaia. Then the poems describe the particularities of a woman’s everyday life, moving through the stages of childhood, adulthood, and elder-dom. “I’ll make sentences/ gather nouns and verbs/ the occasional unnecessary adjective/ the mighty metaphor/ pile them together/ like stones on the beach.”

Pauline Le Bel is an Emmy-nominated screenwriter and singer who arrived to live in B.C. in 1998. She is known for her portrayals of the “little sparrow” Edith Piaf and her interpretations of the music of Jacques Brel. Her CDs include: Dancing with the Crone, a musical journey into conscious and juicy aging; Rescue Joy, songs about loss and starting over; La Tendresse, a French CD with songs of Edith Piaf, Jacques Brel and her own French songs; Deep Fun: Songs about Science, Food and Sex, her CD of amusing songs; and Voices in the Sound, the soundtrack to her cosmological musical about Bowen Island.

Le Bel has on a Cable ACE award for Best Writing in a Children’s Special. In 2001, she performed her one-woman show, The Way of the Goddess: Songs Honouring the Divine Feminine, at Vancouver’s Sacred Music Festival. She writes a blog integrating science, song, nature and spirit, all aspects of life explored in her second book, Becoming Intimate with the Earth (2013), the first book in the Flourishing Earth series by Collins Foundation Press (CFP). “The goal of the series it to contribute to a vibrant conversation, and a wholesome vision of how humans and all other life forms on the planet can co-exist in mutually enhancing relationship.” Le Bel offers workshops on Becoming Intimate with the Earth as well Kiss the Crone workshops for women of all ages who want to access the wisdom of their Inner Crone.

“Pauline Le Bel is above all else a praise-singer whose poems call us to participate in the universal song,” – Susan McCaslin.

EMPLOYMENT OTHER THAN WRITING: Singing

They Ask Me Why I Sing So Loud (Collins Foundation Press, California, 2017)