Lane gets Order of Canada 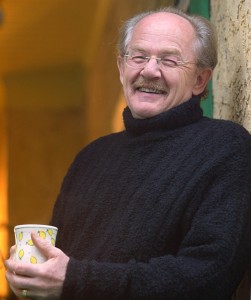 Patrick Lane will be invested into the Order of Canada later this month.

Lane left school to work as a labourer, fruit picker and truck driver, later becoming a first-aid man because it paid an additional 15 cents per hour. In a company town of Avola, with 150 people, he sometimes dealt with grisly injuries. Having been a regular at Rivard’s pool hall in Vernon, he dreamed of making his living as a pool player until his teacher said he could never make it because he wore glasses. Lane decided to try writing instead. He mailed three poems to Canadian Forum and they were all accepted. When other poems sent to PRISM at UBC were rejected, Earle Birney nonetheless sent him an encouraging letter of praise.

Lane came to Vancouver after the death of his brother Richard (Red) Lane, also a poet, in 1964, due to a cerebral hemorrhage. After three children, he and his wife divorced and she married a rich man. Lane was astonished to hear the poetry of Al Purdy, a mentor-to-be, who later drank with him at the Cecil Hotel in Vancouver, and his course was set. He also received some early encouragement from Earle Birney. In 1965, along with bill bissett, Jim Brown and Seymour Mayne, Lane began one of the first literary publishing houses in counter-cultural Kitsilano called Very Stone House Press. Its first books appeared under the imprint talonbooks/Very Stone House. Talonbooks and Very Stone House had become separate imprints by 1967. The latter would publish poetry by Red Lane and Pat Lowther’s This Difficult Flowring.

In 1968, Patrick Lane was jarred by the shooting death of his father by a customer who had a grudge against the earth moving equipment company for which his father was an employee. In 1969 Lane moved to Trumansburg, New York, to work on the New American and Canadian Poetry periodical. Very Stone House Press became Very Stone House Press in Transit for ten years. Down and out in Toronto, Lane sold his literary papers to McMaster University for $3,000 in 1971 and took off, wandering through South America for three years. He almost died after being bitten by a poisonous centipede. It was one more close call, having survived several severe car crashes.

In 1972 Lane was awarded the York University Poetry Award for his book Mountain Oysters. Since then he was won some of the major poetry prizes in Canada including the Governor General’s Award in 1979, the Canadian Authors Association Award for Poetry in 1988 and the Dorothy Livesay Prize. His first published story ‘Rabbits’ appeared in the Canadian Forum in 1985 and received a National Magazine Award; seven years later he published his first collection of fiction. Having survived broken marriages and addiction to alcohol, Lane has produced more than 20 books of poetry and now lives comfortably in Victoria with his partner and fellow poet Lorna Crozier, both of whom teach writing at the University of Victoria. They met a writers’ workshop in Saskatchewan in 1976 when Crozier was married. He is the father of five children and the grandfather of five. Fellow poet Susan Musgrave organized a 55th birthday celebration for Lane in 1994, gathering 54 poets for a commemorative volume called Because You Love Being a Stranger. He is well-liked by his students and revered by his writing colleagues, but his reputation for bluntness often precedes him. “He’s like a dog that sometimes pisses on the rug,” says Victoria writer and friend Linda Rogers. In fact, Lane has mellowed somewhat into a ruminative soul, writing evocative descriptions of wildlife and flowers as a passionate gardener for his memoir called There Is a Season: A Memoir in a Garden. “Guilt is the emotion that wastes a life,” he writes.

Regret, guilt, violence, shotgun weddings, thievery, carnivals, drunkenness, deaths. Ostensibly There is a Season: A Memoir in a Garden is an uplifting work of a man who kicked alcoholism in 1999 by taking refuge in his garden, observing his pond and flowers, but it’s mostly memorable as an autobiographical litany of finely etched pain. The death of Lane’s revered older brother Richard ‘Red’ Lane, also a gifted poet, was fundamental. At his wife’s urging, Lane had kicked his brother of their trailer in Merritt two months before his death.

“Back in the late 1950s and early 1960s while I struggled with my early poems, I lived in a trailer park in Merritt, a wretched, dusty mill town in southern British Columbia. My two children were three years and one year old and my young wife tried and failed daily to be happy in the miserable trailer the bank owned. I left that flaking aluminum prison each morning for a job in the sawmill, the only life I knew then, though I laboured late into the night on writing my poems. I think it was poetry that save me from killing myself or killing others. There were times when I sucked the steel barrel of my Lee-Enfield rifle or, worse, aimed it at a passing pickup truck. What saved my wife I do not know. In December 1964, there was a phone call late at night from my sister, Linda, telling me Dick was dead. I borrowed my boss’s car and drove crazily over the winding mountain roads to Vernon, where my birth family huddled, waiting for his ashes to be shipped up from Vancouver. In four more years I would be gone, my wife remarried and my children lost to me. After my divorce I lived in a fury. I ranged from woman to girl, friend to stranger, bar to barrio, city to village, all designed with one end in mind, to kill myself or at least kill whatever it was that daily ate me alive. I made women fall in love with me and then discarded them like chaff. Guilt, fear, self-pity, self-loathing, self-destruction, all and none of them. I remember little of those years. Much of it is blacked out by depression, alcohol, and drugs. I remember waking up in a car wreck in a snowbound field south of Prince George and wondering why I was still alive. I pried the barbed wire off the door and walked away in search of a bar.”

Anyone somewhat familiar with Patrick Lane’s past will see autobiographical elements in his his first novel, Red Dog, Red Dog, about two brothers in a unnamed Okanagan town–and the possibilities for redemption and forgiveness. The story is redolent of Lane’s harrowing upbringing and the desperation of feeling trapped within patterns of violence and secrecy. The story is partly narrated by one of the dead infant daughters buried by the boys’ violent father, Elmer Stark. While the older brother, Eddy, acts out with drugs and weapons, the more introspective brother, Tom, tries to keep a lid on his feelings. Red Dog, Red Dog was shortlisted for the Rogers Writers’ Trust Fiction Prize and the Ethel Wilson Fiction Prize.

After Red Dog, Red Dog, Patrick Lane believed his poetry career was at an end. It was only while revisiting his poems for a collected works that he experienced a rekindling in his love for poetry. That rebirth launched him on a new phase and style of poetry composition with Washita (Harbour $18.95), his first collection of his new work to appear in seven years. Honest and  reflective, Washita evokes the loss of loved ones, the breakdown of our bodies and the acquisition of hard-won wisdom.

Patrick Lane has lived and travelled extensively and his work has been published in England, France, the Czech Republic, Italy, China, Japan, Chile, Colombia, Yugoslavia, the Netherlands and Russia. He has been a writer in residence and teacher at Concordia University in Montreal, Quebec, the University of Victoria in British Columbia, and the University of Toronto in Ontario.

Patrick Lane lives near Victoria, B.C., with his wife, the poet Lorna Crozier.

The Order of Canada was created in 1967.

As of 2014, here is a list of literary British Columbian authors who have received the Order of Canada: