There was a time when Raziel Reid’s debut novel about a gay teenager would never have been published. 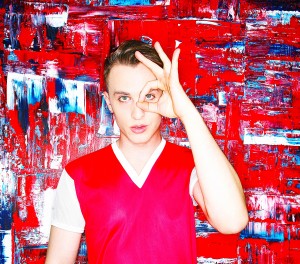 When Everything Feels Like the Movies was launched in Gastown earlier this month.

The 24-year-old Xtra society columnist Raziel Reid finds himself the surprise winner of the Governor-General’s Award in the children’s literature category.

His winning novel is anything but childish, but he opted to have his story submitted as a Young Adult novel in this year’s competition.

A self-described “anti-social columnist, anti-fur fag” and creator of the pop culture blog Blitz & Shitz on DailyXtra.com, Raziel Reid grew up in Winnipeg and has relocated to Vancouver. He’s now one of the youngest-ever finalists for a Governor-General’s Award.

As a graduate of the New York Film Academy, Reid performed off-Broadway, worked as a go-go dancer, and wrote and acted in the short film End Point prior to being nominated for a Governor-General’s Award in the children’s literature for his debut YA novel When Everything Feels Like the Movies (Arsenal Pulp $15.95) about a teen tragedy that was inspired by a real-life death in a California high school. In 2008. a 15-year-old gay student named Larry King asked 14-year-old Brandon McInerney to be his Valentine in front of a bunch of jocks. A few days later, McInerney brought a .22 rifle to school and shot King twice in the head.

Reid has extrapolated from this news story to fashion a edgy and non-sugarcoated novel, full of gender-bending teen glamour, mischief and melodrama. High school in When Everything Feels Like the Movies is likened to a film set with the “Crew” making things happen, the “Extras” filling empty spaces and the “Movie Stars” everyone wants to be with. The openly gay protagonist Jude Rothesay doesn’t fit into any of the groups. He doesn’t get invited to the cool parties and people are not hoping to have him appear on their Facebook pages. But as a self-professed “flamer,” he’s not about to be sidelined from the action. In fact, he’s willing to set the whole show on fire: He’s determined to get Luke Morris to say yes to the Valentine’s Day dance.

The audacious, creative and rude lead character Jude, according to publicity materials, “smells like Chanel Mademoiselle and reads Old Hollywood star biographies like gospel; he doesn’t have the easiest path to travel in life, but somehow he paves his own yellow brick road and wishes we could join him over the rainbow.”

Reid was shy in school and say Jude is not a self-portrait. He recalls learning about the California tragedy as a high school senior at home watching a tearful Ellen DeGeneres plead for tolerance in its aftermath.

“Every young gay guy I know wants to be famous,” Reid told Pat Johnson of Xtra in an interview, “or thinks they are famous. It’s this weird thing; it’s like a cultural disease, almost, that we all have. Social media amplifies it, but I feel like it’s rooted in insecurity. A lot of gay people were not very popular in high school, and picked on, and so they dream of sort of showing everyone that they are special. That was certainly Jude’s goal–just prove all of his haters wrong.”

When Everything Feels like the Movies was subsequently selected as a finalist for CBC Radio’s Canada Reads 2015 competition themed as “Books That Break Barriers.” [Other nominees: And the Birds Rained Down by Jocelyne Saucier (translated by Rhonda Mullins); The Inconvenient Indian by Thomas King; Intolerable: A Memoir of Extremes by Kamal Al-Solaylee; and Ru by Kim Thúy (translated by Sheila Fischman).] His book’s representative for the panel debates to be held March 16-19, 2015, is Elaine “Lainey” Lui, co-host of CTV’s The Social.