Illustrated plaques are now being officially added to Vancouver's streets--on lamp posts--to publicize the richness of Vancouver as a literary city. 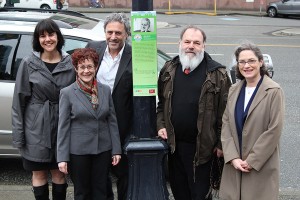 This ongoing project was kickstarted by the vision of poet and philanthropist Yosef Wosk and spearheaded by the city’s Chief Librarian, Sandra Singh.

Alan Twigg of B.C. BookWorld was called upon to select the sites and supply succinct texts for each plaque.

More plaques will be added every year.

A companion interactive online map (vpl.ca/literarylandmark) highlights the landmarks around the city and offers further details on the authors, as well as links to their works in the Vancouver Public Library catalogue. “We wanted to bring out Vancouver’s literary history and make it come alive right at street level,” says Mary Lynn Baum, Vancouver Public Library’s board chair, “right where it happened.”

For instance, Malcolm Lowry, author of Under the Volcano, who lived in the West End as well as in squatter’s shack at Dollarton, is remembered with a plaque adjoining the The Haywood bandstand (1755 Beach Ave.) at English Bay. The empty ‘bandstand where no band stands’–and it remains that way to this day–inspired Malcolm Lowry’s caustic poem ‘Lament in the Pacific Northwest’ in which he bemoaned the puritannical joylessness of Vancouver, mainly because he objected to the city’s antiquated liquor laws.

The Insite supervised injection site (139 East Hastings St.), North America’s first facility of its kind, fittingly has a lamp post plaque outside its door to honour the late Bud Osborn, an activist and poet who was instrumental in establishing the service. Vancouver’s foremost writer for several decades, the humourist Eric Nicol, has a plaque on Georgia Street adjoining the VPL’s “walk of fame” (where marble plaques indicate the winners of the George Woodcock Lifetime Achievement Award, first won by Eric Nicol). “Dad would have been extremely proud of his inclusion in the landmarks project,” said his daughter, Cathy Nicol, who was on hand when VPL unveiled the Eric Nicol plaque.

Back in 1986 Alan Twigg, a former VPL board member, wrote a book called Vancouver & Its Writers: A Guide to Literary Landmarks in which he attached locations–in print only–to coincide with the works of 100 writers for the city’s centennial. At the time the city had only one official literary landmark for a local writer–the Pauline Johnson memorial in Stanley Park.

“It was just an idea to propagate awareness,” he says. “Now we have the real things. This progress makes me think of some lines at the end of a satirical poem that Earle Birney wrote here in 1947:

‘no Whitman wanted
it’s by our lack of ghosts
we’re haunted.’

The new plaques affirm that both Vancouver and British Columbia have become literary hotbeds. There are more than ten thousand B.C. authors included in the ABCBookWorld public reference site hosted by Simon Fraser University Library.

“Vancouver is blessed to have such a vibrant and dedicated public library system to support our curiosity and love of knowledge,” says Yosef Wosk. “VPL’s new Literary Landmark initiative extends the definition of a library: It is not just a building but also the authors, the publishers, the readers, the very streets of our city. Daphne Marlatt with her plaque

“The public library embraces these many writers’ homes as well as hideaways, apartments, parks and retreats that nurtured creativity. Ultimately, each of us is a library as is the city itself.”

Daphne Marlatt has a plaque near the Burrard Bridge. “This project sets words from our city’s literature into concrete features of the city itself” says Marlatt. “This delights me because my words want to dig their way deep into the history and terrain of this ever-changing place. We are shaped by the place we live in as much as it is shaped by us.”

B.C. BookWorld will proceed, likely in conjunction with VPL and other libraries, to make a Literary Map of B.C. The first stage will be designating 100 literary sites around the province. Meanwhile plaques for several dozen authors can be found all over the city–from the Metro Theatre in south Vancouver to the PNE in east Vancouver to the street where Margaret Atwood lived when she was teaching at UBC–with ten more to be added next year.

The proliferation of ‘Lamp Post Lit” can also be discovered at the Vancouver Public Library’s Literary Landmaks site.

Click here to listen to CBC radio’s On The Coast feature on the Literary Landmarks.