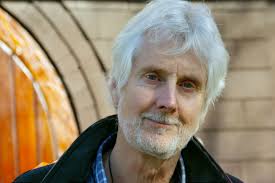 Artist and heritage expert Michael Kluckner has turned a new page for his first graphic novel, nurse Toshiko (Midtown $19.95). Set during World War II, sick Toshiko Yesaki and her cousin have been sent to BC’s interior from ‘Japtown’ in Vancouver due to the internment of Japanese Canadians. They go to school and also work on Calhoun Farm near an unfriendly town [Salmon Arm] where most residents view them as enemies. But one of Toshiko’s classmates is curious and sympathetic about the exile of Japanese-Canadians, and romance develops. “Remember Romeo and Juliet in the first term?” she says, during one of their secret meetings. “That’s us.” The scandal of this relationship between Toshiko and a local boy, nicknamed Cowboy, who doubles as the novel’s narrator, pushes the couple out of BC’s interior and back to Vancouver when his racist father objects. The two, love-struck teenage runaways know they will be forced to face the racial, moral and social realities of wartime Canada but they head to the coast anyway. Kluckner notes there was a Calhoun Farm, on Carlin Road, in the Tappen Valley, near Shuswap Lake, where Henry and Hilda Calhoun welcomed Japanese Canadian families during the internment. Most were the extended family of Kumazo Nagata of Mayne Island. Kluckner’s teenage characters are fictional, but Cowboy’s side of the story is partly inspired by an acquaintance, born in 1934, who had worked on the Calhoun Farm in 1952. 978-0-9881101-7-5