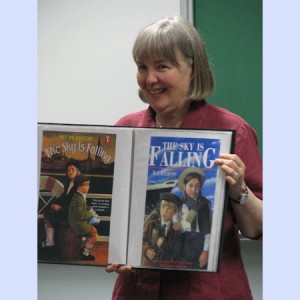 According to the jury: “Kit is a generous member of the children’s writing community, being one of the co-founders of BC’s children’s writers and illustrators’ organization, CWILL BC, which provides writers and illustrators with a way to connect, support each other, and promote children’s books. She credits reading L.M. Montgomery’s Emily of New Moon as an inspiration for becoming a writer. She passes the tradition along. Who knows what young apprentice writer is reading one of Kit Pearson’s books right at this moment?”

Kit Pearson’s books have been published in Canada in English and French, in the US, Australia, New Zealand, Japan, the Netherlands, Germany, Great Britain, China, and Korea. She has won many awards for her writing, including the Vicky Metcalf Award for her body of work in 1998.

Kit Pearson was born in Edmonton in 1947 and grew up in Vancouver. She attended UBC and worked as a children’s librarian in St. Catherines, North York and Burnaby for ten years prior to receiving the Canadian Library Association Book of the Year Award, the Mr. Christie’s Book Award and the Geoffrey Bilson for Historical Fiction for Young People Prize for The Sky Is Falling (1989), the first of three novels about two English children evacuated to Canada to escape the bombing of World War II. Looking at the Moon (1991) and The Lights Go On Again (1993) complete the trilogy. Pearson’s A Handful of Time (1987) won a Canadian Library Association Book of the Year Award and was preceded a year earlier by her first book, The Daring Game.