Kevin Spenst is not Yann Martel 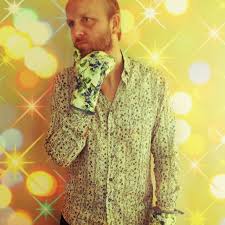 Kevin Spenst represents a new generation which avidly incorporates the digital world into their writing routines. In 2003, he wrote a new story, online, every day for the entire year.

In 2004, Spenst again wrote daily, this time in the form of flash fiction inspired by contemporary art. Another project involved writing and emailing stories to numerous people around the world who would in turn print and hide the writings so that others would find them. Each piece had Spenst’s email address and a plea for the finder to identify their whereabouts.

In 2007, Spenst self-published Fast Fictions, a sampling of the stories he had previously emailed out. In 2008 he revisited his story-a-day-for-a-year challenge to himself, this time using a different pseudonym for every piece. Reader feedback ranged from fanmail, to requests for medical advice, to hate mail when Spenst wrote under the pseudonym Yann Martel.

According to publicity materials, Kevin Spenst’s debut collection of poetry, Jabbering with Bing Bong  (Anvil Press, 2015) opens as a coming-of-age narrative of lower-middle class life in Vancouver’s suburb of Surrey, embroidered within a myriad of pop and “post-Mennonite” culture.

We are told, “Language is at play with sit-com sonnets, soundscapes of noise, videogame goombas, an Old-Testament God, teenage longing within the power chords of heavy metal and the complicated loss of a father to schizophrenia. Jabbering with Bing Bong chronicles the heartbreaking and slapstick pursuit of truth in the realms of religion, mental health and poetic form itself.”

Spenst’s poetry has appeared in Prairie Fire, Contemporary Verse 2, Rhubarb Magazine, Capilano Review, dANDelion, filling Station, Poetry is Dead, Moonshot Magazine, The Maynard, illiterature, The Enpipe Line, V6A and Ditch Poetry. He was shortlisted for the Robert Kroetsch Award for Innovative Poetry, his manuscript Ignite was a finalist for the Alfred G. Baily Prize, and in 2011, pieces from Ignite won the Lush Triumphant Award for Poetry. He has published several chapbooks of poems, including Happy Hollow and the Surrey Suite (2012), Pray Goodbye (Alfred Gustav Press, 2013) and Retractable (Serif of Nottingham, 2013).

Kevin Spenst is also a founding member of Thursdays Editing Collective at Carnegie Center, a group that assists writers in Vancouver’s Downtown Eastside.

You can check out Spenst reading his poem inspired by the theme of Gilligan’s Island on Youtube.

He lives in Vancouver.

3 Responses to “Kevin Spenst is not Yann Martel”